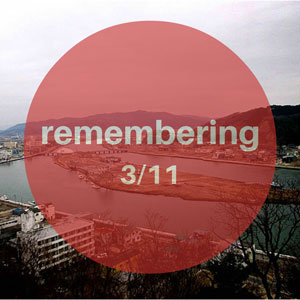 3/11: the anniversary of the 2011 Tohoku earthquake and tsunami

I arrived in Japan in 2011 only a few months after 3/11 and at that time the Tohoku earthquake and tsunami was still very much on everybody’s mind as I was packing my bags to go. On the anniversary of 3/11 it’s hit me that I never talked about visiting the area myself, mainly because I felt quite overwhelmed by the visit at the time. I went in 2013 with AFS, an organisation I volunteered with while I was in Japan.

A small group of AFS members visited Sendai in Miyagi Prefecture and spent quite a bit of time in Ishinomaki, where almost half of the town had been levelled by the tsunami. The area became infamous because of the delay by some teachers from Okawa Elementary School in heading for high ground. In all 70 students and nine teachers lost their lives in that school alone. 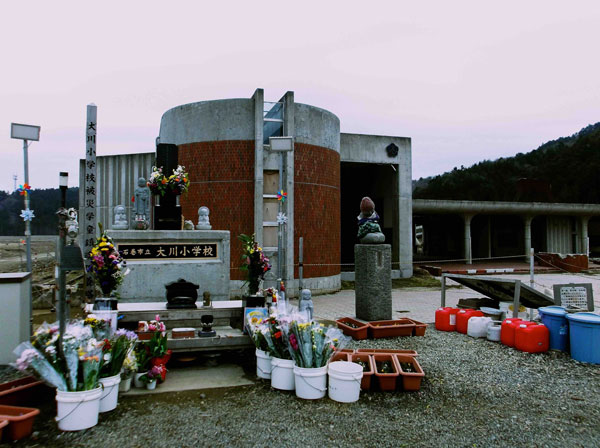 A shrine at Okawa Elementary School.

As well as witnessing the devastation surrounding all of Okawa ES we visited another school that stood in slightly better condition. As with all schools in Japan the design and layout was totally uniform – you could have been anywhere in the country – but the air of abandonment as we walked around could tell any visitor that this wasn’t just a school that had been closed down for refurbishment. From a distance there wasn’t anything that special about it but then we saw the buildings hanging at odd angles; broken furniture sitting in the hallways. 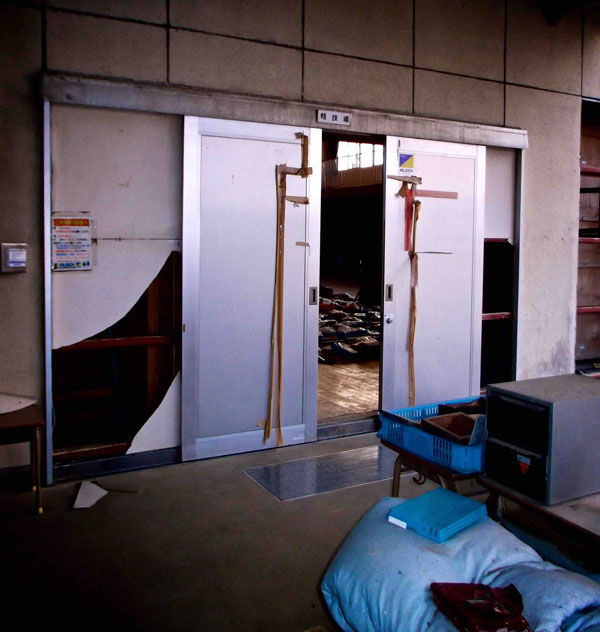 The damaged entrance to the school gym. 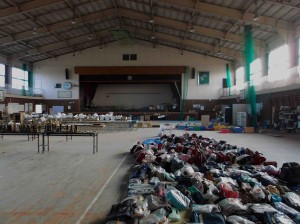 The contents of the school gym gave it away: filled with sections of unclaimed, washed-up belongings. Some of them were so intimate: graduation diplomas, wedding photos, sports club equipment. No-one wanted to throw away things that didn’t belong to them. 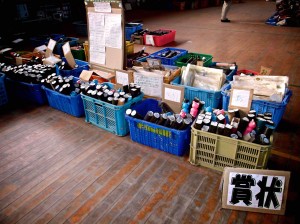 Certificates of merit sorted into name order, waiting to be claimed.

They had gone unclaimed because there was no-one left to collect them, or maybe they just couldn’t face going back there and sorting through all the reminders of people who had been lost.

I keep on contrasting this experience with at visit to the Hiroshima Peace Memorial Museum: in both places there was such a heavy silence while everyone was lost deep in their thoughts. At the museum my friend and I got halfway through the exhibits and could barely finish looking at the rest. It was such a demonstration of the evil that humans can do to each other. But Ishinomaki and the surrounding area are not examples of humanity at its worst – in fact, fundraising and support activities since the disaster have shown many people at their best – but instead they’re an example of how powerless we all are in the face of nature.

While walking around Miyagi two years ago I remember thinking “why would anyone choose to live somewhere so dangerous?” but of course all we were seeing was the devastation: the miles and miles of levelled buildings, flattened earth, scattered concrete. 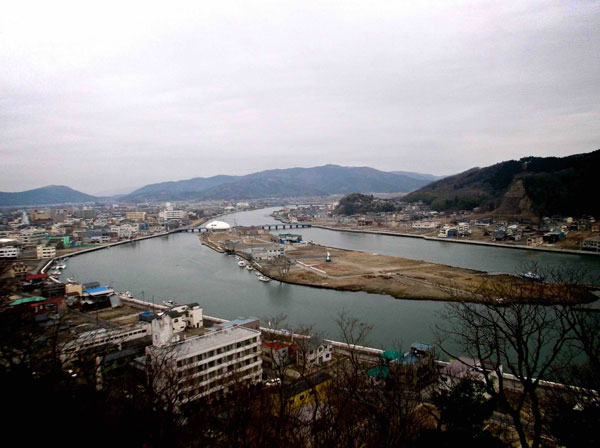 Living by the sea as I do now I understand some of the appeal of the beauty. And we never do think it’s going to happen to us. If a disaster like 3/11 does occur then there’s little more many can do than to brace for impact.

The main thing I took away from the conversations I had in the area was how hard people were working to be remembered. There’s a natural instinct to move on from tragedy but those still living there have little choice but to get on with their lives. Many didn’t have anywhere else to go even after their homes were destroyed and others never wanted to move.

What was encouraging was hearing stories of all the big and small ways people are trying to help. Each of us left the area loaded up with souvenirs of the food and drink they’re still producing in Ishinomaki to try and remind our friends to visit and put money into the local economy. So today I’m remembering the people I met who were trying to rebuild their lives and all the people I will never get to meet because of what happened on 3/11.