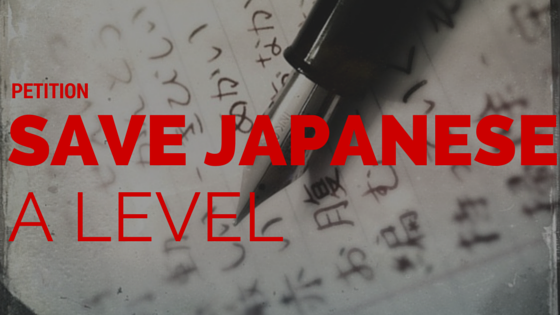 There are countless benefits to learning a foreign language – Google it and they’ll pop right up – but why should we continue studying Japanese?

While I was in Japan it was clear that the US has very strong economic, historical and cultural ties to Japan and that they work hard to continue this relationship. For a great number of young Japanese people, going abroad means travelling to the States – . My students were interested in Italy too, or heading to Guam, or seeing the Eiffel Tower, but few of them were interested in the UK. The number of my own students interested in Britain increased slightly while I was there (I kept that propaganda machine well-oiled), but it still wasn’t an exciting option. The UK has a far lower profile than the US. Having met a number of people involved in UK-Japan relations I don’t doubt the hard work that is going into maintaining our relationship, but I believe we lack the resources and people power to build on our important ties with Japan. Cutting Japanese A level will only continue this deficit.

When the JET Programme began in 1987 there was one Brit for every four Americans. Fast forward to 2014 and there are six Americans for every Brit. The numbers make sense when you look at population size – in fact when you look at the relative population sizes, perhaps we’re doing better than we would if the numbers were evenly distributed – but I would still welcome an increase in British representation in Japan. London 2012 gave us a sort of Cool Britannia publicity among younger generations in Japan but we need to go further. Our young people should have the opportunity to discover Japan and Japanese, but also to spread the word about how wonderful our own country is.

I would dearly love to see a mutual interest grow and I think one of the best ways to develop this is to keep the Japanese A level – get ’em young! Get this generation’s future entrepreneurs interested in Japan and we’ll see them adding to exports that were worth over £9.4 billion in 2012.

staves off dementia and Alzheimer’s

There are plenty of ways to measure the benefits of language education but some of them are softer and less easily measured. The results may take a long time to manifest, but they’re worth it. Take the example of Sarah Parsons,  who spent a number of years away from all things Japan-related. She’s now the Chair of JETAAUK and Managing Director of Japan in Perspective, working hard to foster relations between our two nations. Whether those taking Japanese A level end up in a Japan-related field or just enjoying the language and infrequent visits, they will still become cultural ambassadors for both Japan and the UK.

Learning a language helps the individual; Japanese A level will help everyone.

Sign the petition, pass it on to your friends and help save Japanese A level.

Photo credit goes to RW Sinclair. Original edited by me.