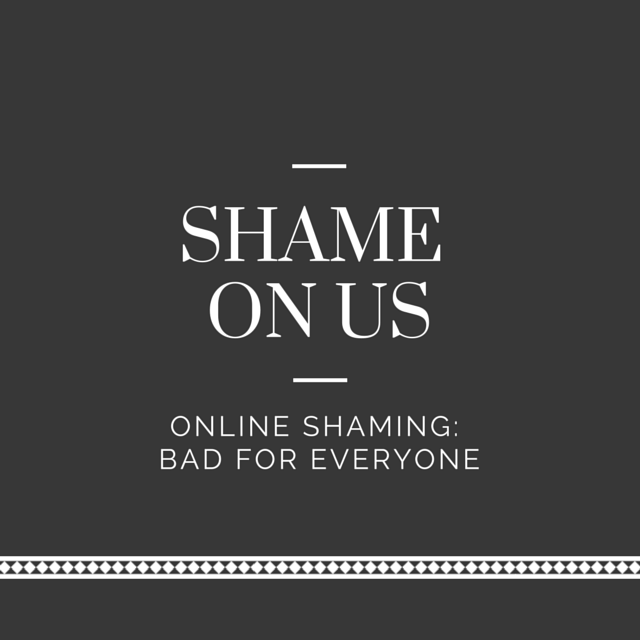 Online shaming: bad for everyone

A lot of what I write about comes from some coincidental link. Two different posts yesterday led me to write this post today. The first was a beautifully written piece about internet bullying in the New York Times by Jon Ronson, that a friend shared on Facebook. You should give it a read. The second was a Buzzfeed article (originally posted in December) about a bar owner’s refusal to let homophobes hire his place.

I’m on my second reading of Brené Brown’s The Gifts of Imperfection. Her talks have become well-known via Ted and other sources and apart from her frequent references to God (which rub a little against my atheist world-view) and her saccharine writing  which is a little too much for me at times, her book is brilliant and her insights valuable.

I mention her because she has researched shame for the past decade (when I Googled her the third autocomplete result was ‘Brené Brown shame’) and it ties together perfectly with the two articles I mentioned. When I was mulling this post over yesterday I hadn’t actually yet read the whole of Ronson’s article. I saw it in the morning before work and knowing that it was going to be a piece to savour, I Pocketed it and kept it at the back of my mind all day.

A long time ago a friend of mine confronted me, after I briefly joined an internet lynch mob by tweeting a throw-away comment. I don’t actually remember what I said or even what it was all about (and I’m too lazy to scroll back through everything). But I do remember feeling ashamed of my desire to be part of that group and grudgingly respecting her for not being so easily led and for choosing to do the right thing. What also helped was that she did it privately which stopped me from going on the defensive, trying to save face.

We all struggle to put ourselves in others’ shoes and as human beings we are so much more forgiving of our own actions than those of other people (check out fundamental attribution error and other cognitive biases). Ronson lists a whole load of people metaphorically hanged online for their mistakes. When I read Justine Sacco’s comments my first thought was that she was trying to be ironic. It wasn’t taken that way (sarcasm and irony don’t translate well online) and she became infamous through our bloodlust.

What struck me was that all of us could find – or have found – ourselves in either role: that of the foot-in-mouth screw-up or the high-horse pursuer. How many of us manage to do the right thing every time?

Alex Proud did. After he made it clear why he wouldn’t be allowing the booking to go ahead, he went public, but he kept the details of the company and their employees out of the news. Bravo. It’s too easy to give in to that baser human instinct: Schadenfreude. We can all succumb to it if we don’t exercise restraint.

What would have been the result if he had told all? I think Ronson shows us where it leads. Sam Biddle suffered a similar fate to Sacco. Shaming begets more shaming – no-one’s bloodlust is satisfied. Would any of the homophobes scared of Proud Camden have changed their minds if Alex Proud had gone for naming and shaming? They would probably have lost their jobs (with all the consequences unemployment brings) and I doubt they would have reached a moment of enlightenment. They would have reacted defensively, lashed out and blamed others – probably liberal, gay-agenda-promoting, flying spaghetti monster disciples. But even without the public naming, they know who they are. There’s no shaming, just the opportunity to privately examine their conscience. Does homophobia really sit with the core tenets of their religion? I hope they’ll think that one over. Online shaming and bullying is scary and it’s real. It’s our responsibility to confront it and not give in to our own desire for ‘justice’.

What is our biggest aim when we confront views like homophobia, transphobia and misogyny online? I know part of me wants to punish, go Old Testament, eye-for-an-eye and all that. But ultimately we want to change people’s minds. A recent Savage Lovecast (big shout-out to the friend who introduced me to his amazing podcasts) talked about how some gay people occasionally enjoy sitting with homophobes for a chat because their views are now so outdated. In some areas of the world we have got so far that something like that is possible. Ruining someone’s life is unlikely to change their mind and get rid of their prejudice – treating them like a human being might.