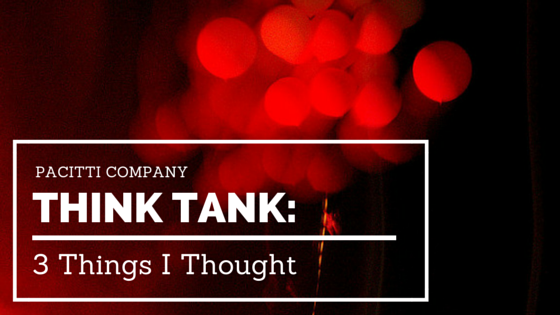 Think Tank: 3 things I thought about while listening to the salon participants

On Thursday last I visited my first Pacitti Company Think Tank Salon and came way positive, optimistic and inspired. We were there for a discussion with Madeleine Botet de Lacaze [watch out: there are a lot of NSFW images on her site] on her recent work Carrying Stones and her interest in astrology. Carrying Stones explored the personal: the battle between body and mind and the survival instinct (along with so, so much more). The salon, entitled ‘What Makes You Feel Alive?‘ gave me plenty to consider, but here are the 3 things I thought about that are still with me:


1. I’ve really missed out by not having been to one of Madeleine’s performances

Her description of the craft, research and rehearsal that went into Carrying Stones, and the honest, sincere praise offered by salon participants who did get to see it left me convinced that Madeleine’s an artist who makes incredible work and that Carrying Stones was a true experience – something you had to see in the flesh to truly understand.

2. Some things are better left un-documented

Documentation was a subject we discussed at length in the group as Madeleine regretted not having a more thorough record of her work. I actually enjoyed her description of Carrying Stones – accompanied by only a few photos and videos – because it left us open to imagine the work and to listen to her carefully. I don’t believe a video of the work could have done it justice because there was so much you had to feel in person.

Ever stood in a crowd at a gig, surrounded by people recording the performance on their smartphones, rather than actually watching and listening?

Some experiences are better for knowing that they’re as fleeting as life is.

3. Performance art requires trust and an ability to laugh at yourself

You can’t be afraid of looking silly. Madeleine performed the 30-minute long Carrying Stones on the hour every hour, for six and then seven hours straight. With every performance the audience changed and the dynamic did too. In one performance the audience was shy, reluctant to take part, with closed body language; in another, two young girls stood at the back, giggling awkwardly, embarrassed by the nudity and the strangeness of it all. It was brave of Madeleine to perform naked – a theme that runs through much of her work – and to interact with the members of the public who wandered in off the street, curious to see the free performance. But it also takes bravery on the part of the audience to engage and not worry about how they look. To not think that they’re being recorded for others’ amusement: that it’s not a new reality show for us all to enjoy their gullibility. Watching Carrying Stones you’d have to be comfortable with being uncomfortable.