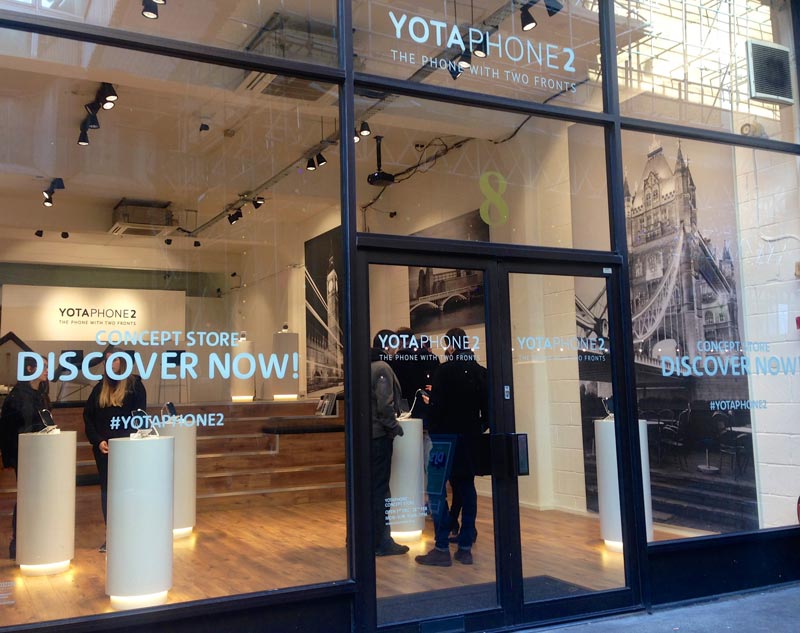 I won’t pretend to know everything about the latest phones and I’m no early-adopter. But as anyone who has seen the video of me smashing up my Android phone after I left Japan can attest: I can get passionate about technology. Enter the YotaPhone 2. I was exploring London recently with a friend who lives there and knows some great areas off the beaten track when we came across a ‘concept store’ for the new* YotaPhone 2**. It was one of those lazy, meandering days when you’re happy just looking at the world around you and going into places that stand out so with a ‘why the hell not?’ shrug we entered the ‘flagship’ London shop.

There were three customers already in there trying out the phone and speaking to staff and immediately a friendly assistant came up to us and started explaining the concept. At first glance I wasn’t sold and it was hard to understand what another £550 smartphone had to offer a saturated market, but with a little explanation I could really start to see the appeal.

YotaPhone 2 has 2 screens (‘The phone with two fronts’) : on the front is an all-colour LCD screen just like you’d find on any smartphone and then on the back is a second screen that uses the same technology as e-readers. I find a lot of my time taken up reading interesting blogs online, saving links to Pocket, following Twitter suggestions and checking out the latest articles and these are all things I would rather do on my Kindle if only it were that easy. Switching between devices can be a hassle and I liked being able to move seamlessly between spotting a new article on Medium (like these two interesting pieces) and then reading it on the e-ink screen.

My friend holding the YotaPhone 2 and wearing a Jawbone

According to the website the phone gives you up to 100 hours of reading time. I’m often on the train or out-and-about, wanting to while away some time online but not wanting to risk a dead battery. Apart from TwoDots [a sometime addiction] I don’t spend much time gaming or on entertainment and use my phone mostly for news and information (as well as communications) and for that YotaPhone 2 would be ideal.

I haven’t been able to put YotaPhone 2’s claims to the test but 100 reading hours is certainly impressive and considering you can use the e-ink screen to view anything you would see on the LCD screen (though it wouldn’t be ideal for uses such as gaming) the technology does offer the opportunity to seriously improve battery life.

As Fortune covered recently, people are most interested in battery life improvements. Forget wearables and the latest ‘in’ thing – we all just want to be able to depend on our gadgets. How many times have you been on a night out and had your phone fail you? Or you’re on the way to meet friends and you’re hoping it’ll last just long enough for you to find each other. How much can you rely on your phone?

So what did I dislike about it? I’m one of the lucky ones to still have an intact screen on my iPhone 5 but I think I’m a member of a pretty select group. I know people who’ve smashed screens three times in quick succession. I get around this risk by having a pretty heavy-duty case (which then covers the bright blue cover – one of the main reasons I had for buying the phone in the first place). Having an extra screen to protect would worry me but I know that wouldn’t put most people off. Yota have predicted that problem and given the two screens a sort of lip/barrier that protects the edges of the screens and hopefully avoids breakages.

Would I buy the YotaPhone 2 myself? My experience with the Japanese infobar did a lot to kill off any interest I had in Android at that time but I’m a practical user – if it works best I’ll buy it and I have zero loyalty to a particular OS. Once my iPhone 5 kicks the bucket (and with a modern technology shelf life of less time than it took them to post the device to you in the first place that shouldn’t be too far off) I’ll seriously consider the YotaPhone 2. Though that could also mean retiring my Kindle and that would be a shame.

*as a self-confessed non-early-adopter [ugh, clumsy phrasing] I’m a little late to the game as it’s been around in its current form since last year… but the store is relatively new!