posted in Feminist Fact Friday on 27 January 2019 by Susi 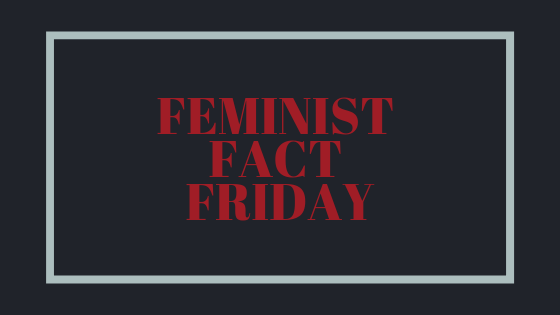 “We have to free half of the human race, the women, so that they can help to free the other half.”

Emmeline Pankhurst, The Suffragette: The History of the Women’s Militant Suffrage Movement

I’ve been thinking about activism for weeks, trying to work out how to be at least a little more active in 2019.

In March last year I went to An Evening with Laura Bates, where she was speaking for the launch of Misogynation. Laura talked about the need to have proof and be well-informed in order to make your argument count. I was struck by just how eloquently she spoke and how she always had the numbers to hand – she moved all of her arguments from feeling familiar but individual to being part of a pattern of behaviour and a wider system in society.

[Your argument] stops being subjective and it starts being more concrete.”

Something I’ve noticed in my own discussions on inequality is that there’s no shortage of people telling you everything’s fine, that really it’s the victim’s fault, that women just aren’t as strong/effective/logical/. Even when you have your own experience to draw on it’s very quickly dismissed as an isolated incident. And the only way to beat vague, clichéd old tripe like these kinds of comments is to have the material to contradict them.

So I’m starting Feminist Fact Friday for myself, with the aim of having 52 facts, stats and stories memorised by the end of the year (well actually, by the end of January 2020) and posting them on here and on my social channels to keep myself accountable.

I’ll be covering a range of themes I think illustrate the continuing state of gender inequality and the difficulties people face due to these issues. I firmly believe that equality is good for everyone – and in 12 months’ time I want to be able to argue that more eloquently and in a better informed way than I can right now.

I intend each Feminist Fact Friday post to include:

Number 4? Where possible I’ll be suggesting ways anyone who is reading can try to make a difference in their own way – and hopefully that’ll lead me to putting my money where my mouth is too.

Week 1 – Only 24% of the world’s parliamentarians are women.

Week 9 – Dame Stephanie Shirley created an all-women software company in the 1960s which was eventually valued at $3 billion.

Week 10 – It will take 202 years for us to reach global economic empowerment parity.

Week 14 – Women are three times as likely to be labelled “too aggressive”.

Week 15 – Women are 29% more likely to get burdened with office housework.

Week 17 – 44% of fathers have been refused a change in working hours.

Week 24 – Women are twice as scared in public spaces.

Week 25 – One in two women have been sexually harassed at work.

Week 27 – Two women a week are murdered by a current or former partner.

Week 28 – Women are 50% more likely to be misdiagnosed following a heart attack.

Week 29 – It takes an average 7.5 years for women to be diagnosed with endometriosis.

Week 32 – Women do 3x as much unpaid childcare.

Week 35 – There are only 25 black female professors in the UK.

Week 36 – Women account for more than half of all STEM postgraduates.