posted in Feminist Fact Friday on 5 April 2019 by Susi 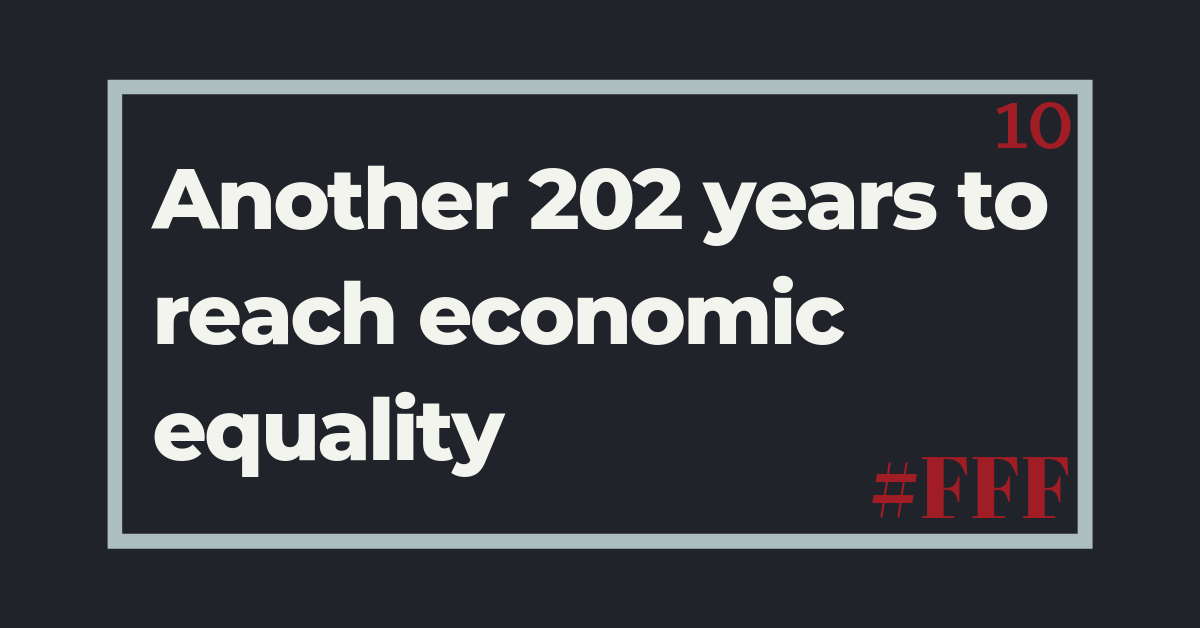 As I recapped in my introduction to April’s theme – MONEY – I opened the Feminist Fact Friday series with the theme POLITICS, and the WEF’s Global Gender Report 2018 estimate that at the current rate of change it will take 107 years to reach political gender equality across the world.

If you thought 107 years was a long wait you’ll love the length of time it’s going to take us to achieve economic equality:

It’s going to take 202 years to achieve global economic empowerment equality. And that really is just for gender. Those numbers will be even more serious for other disenfranchised groups.

Some women won the right to vote in the UK in 1918. As I wrote about in my profile on Dame Stephanie Shirley even into the 1960s and 1970s the economic reality for women in the UK was one that left them far behind men:

Only married women could get their hands on the pill, fewer than one in 100 adults cohabited (nowadays it’s one in six), ** women needed a man’s permission to get a credit card *** and women could be legally raped by their husbands. It wasn’t until the 1970 Equal Pay Act that it was finally made illegal to pay women lower rates than men for the same work.

Living in a capitalist society, money equals power. For as long as women’s economic growth is held back and their huge contribution goes unrecognised they will continue to have a fraction of the power that men have. As Caroline Criado Perez writes in Invisible Women:

The failure to measure unpaid household services is perhaps the greatest gender data gap of all. Estimates suggest that unpaid care work could account for up to 50% of GDP in high-income counties […] If we factor this work into the equation, the UK’s GDP in 2016 was around $3.9 trillion (the World Bank’s official figure was $2.6 trillion).

Further, this isn’t just about righting wrongs. It’s not simply a moral argument on what is or isn’t fair — it’s stopping everyone from making the most of the economic contribution that women already are making and could make even further should they have the same opportunities as men.

The WEF base their economic empowerment subindex on “three concepts: the participation gap, the remuneration gap and the advancement gap.” They explain this further by stating:

The participation gap is captured using the difference between women and men in labour force participation rates. The remuneration gap is captured through a hard data indicator (ratio of estimated female-to-male earned income) and a qualitative indicator gathered through the World Economic Forum’s annual Executive Opinion Survey (wage equality for similar work). Finally, the gap between the advancement of women and men is captured through two hard data statistics (the ratio of women to men among legislators, senior officials and managers, and the ratio of women to men among technical and professional workers).

So, try to base your actions on ways that will move the dial in those three spheres. Here are a few of the very many ways in which you can fight the economic gap.

If you’re employing people are you sure you’re paying men and women the same for similar work? What does the gender pay gap look like in your business, even if you’re under the threshold for gender pay gap reporting (250+ people)? Are you only employing women in ‘women’s jobs’ and men in ‘men’s jobs’? What’s your gender balance throughout different levels of seniority?

What happens to your employees when they become parents? Do women return to your office? In a study on the gender pay gap in Denmark, researchers found that “childbearing accounts for 80 percent of the gender wage gap.” **

When looking for your next job, ask your interviewers what the company’s policies are on diversity and inclusion, what their pay gap is and then if you’re in a position to do so (I know many wouldn’t be) vote with your feet: join a company that respects your value.

Follow Cindy Gallop’s advice and start asking for a pay rise. She says you “need to ask for the biggest number you can say out loud without bursting out laughing”. Do you research, practice, base it on the facts… But ask! Seriously though, do your research. Pieces like this, this and this are somewhere to get started. And don’t forget: it’s not actually that women ask for a raise less often than men, it’s just they’re not granted one as often as men (which is why it’s key that you do your research and make a strong case).*

What is this project about?

Feminist Fact Friday is a passion project to educate myself (and anyone else who might be interested) in key facts that prove just how unequal our society remains, in an effort to skip a decade or ten of the 107 years it’s going to take women to reach political equality around the world. You can read more about this project in my Intro. and check out my intro to April’s theme here.

** Sarah Kliff, A stunning chart shows the true cause of the gender wage gap 19 February 2018