posted in Feminist Fact Friday on 12 April 2019 by Susi 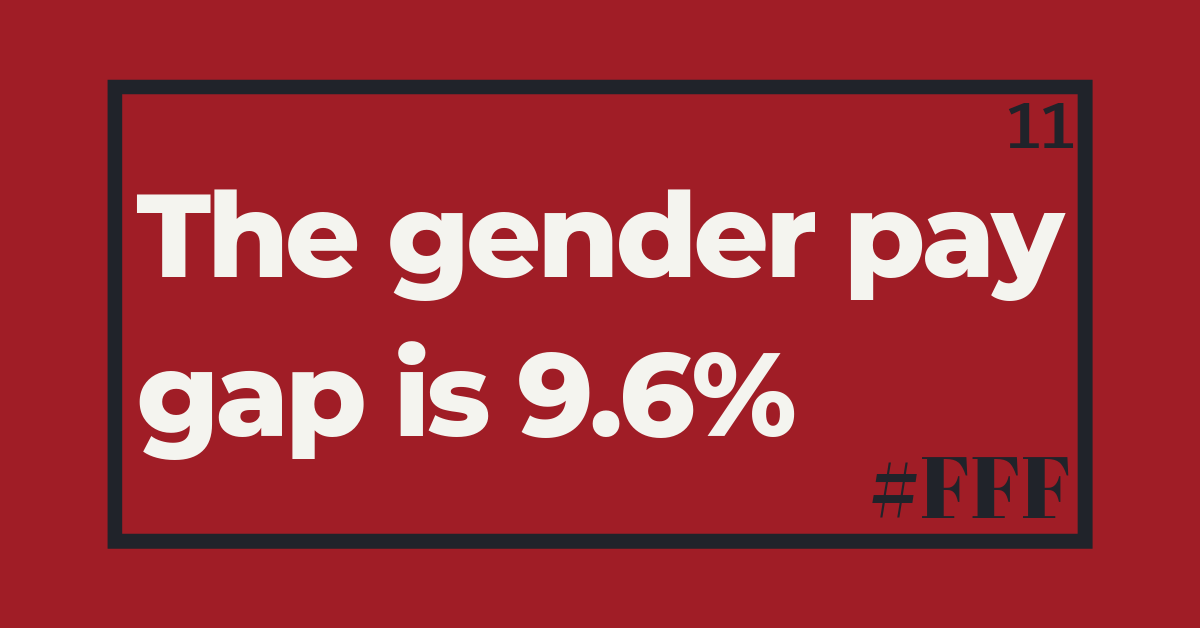 The gender pay gap has narrowed ONLY slightly from 9.7% IN 2018, while at 45% of companies the gaps in pay have increased in favour of men. Every sector pays men more on average than women. ^

All companies in the UK must now report their gender pay gap if if they have 250 or more employees who are based in England, Scotland or Wales. If you don’t understand the gender pay gap or find it difficult to believe it’s ‘a thing’ (considering paying men and women differently has been illegal since the 1970 Equal Pay Act) I’d recommend you check out this article from Sarah Kliff at Vox and have a look at these myth-busters from The Guardian: Gender pay gap reporting is now in its second year in the UK and the very modest improvement shows that reporting alone just isn’t enough to make change happen. In fact, pay gap reporting might end up falling into the law of unintended consequences, as Dr Robert Cialdini showed in his research on negative social proof and California’s Petrified Forest: by bringing attention to the shockingly poor behaviour of companies such as Kwik Fit, Interserve, Inchcape, easyJet, Independent Vetcare, CVS, Aramark, Barclays, Jet2, Lloyds, Academies Enterprise Trust, Clydesdale Bank and British Gas. We’re showing them that they’re not alone in placing so little value on half of the population – in fact, what they’re doing is completely normal!

Why is the gender pay gap important?

I’m following a tried and tested formula that I’ve used across the whole of the Feminist Fact Friday series so far, and that’s to answer the question why is the thing I’m highlighting worth highlighting. Most of the time it feels like it should be obvious why I’m addressing a particular issue, and once again highlighting the fact that our capitalist society feels women are worth less than men feels to me to a clear problem; and yet according to a recent TIME article I highlighted in my introduction to this month’s theme (MONEY) “a new poll from SurveyMonkey, revealed first by TIME, shows that a significant belief gap exists when it comes to the issue of equal pay.” A letter from Anne Ashe I’ve just discovered in researching the theme of the gender pay gap states:

Your article on the gender pay gap (Quarter of employers have gender pay gap of more than 20%, 5 April) did not highlight that the methodology used in calculating the gap is itself discriminatory and underestimates the difference between women’s and men’s earnings.When calculating the percentage difference, the official figures use the higher (men’s) earnings as the denominator – and the Guardian repeats these figures. But if the lower (women’s) earnings were to be used as the denominator then the gap would be bigger. For example, the difference between £80 (women) and £100 (men) is presented as women earning 20% less than men. Why not present it as men earning 25% more than women? Anne Ashe writing in the Guardian Gender pay gap is even worse than the figures suggest 8 April 2019

So, not only are women being paid less than men in every country around the world* but they’re also paid less on average in every sector in the UK^ – and to compound that injustice the figures we’re using to demonstrate the gender pay gap can themselves be considered sexist. As I’ve said in both previous posts on MONEY, in a capitalist society money is power. Women earning less are worth less to society. And in 2019 there’s no reason for that to be the case. Among the many problems that a lack of financial equality causes, women also live longer and have to make do for far longer than men on an already smaller pension.

Throughout my Feminist Fact Friday I try to offer a few suggestions on what you can do with new-found knowledge, righteous anger or heartfelt inspiration. You can explore previous suggestions throughout the series, but here are some that particularly relate to the gender pay gap. Start with the government’s advice Actions to close the gender pay gap and if you’re interested in the subject and would like greater detail, check out the publications they recommend too: What Works–Gender Equality By Design by Iris Bohnet and Why diversity programs fail by Dobbin and Kalev. Put the work in to make a pay rise possible – if you work in a place that doesn’t value you, leave if you can. When you go for your next job don’t let your previous pay define your pay in the new role. Don’t tell them your previous salary. I’ve written more about this in last week’s article on how at the current rate of change it will take us 202 years globally to achieve gender parity in economic empowerment. For organisations I would highly recommend reading Harini Iyengar‘s A Practical Guide to the Law of Gender Pay Gap Reporting. It’s pricey, but a fully comprehensive look at every aspect of the gender pay gap and well worth reading. I’d also recommend you check out my article from the start of the year on investing and the many ways in which women are held back financially and how to go about closing some of that gap.

What is the gender pay gap?

The gender pay gap or gender wage gap is the average difference between the remuneration for men and women who are working. Women are generally paid less than men. There are two distinct numbers regarding the pay gap: unadjusted versus adjusted pay gap. The latter takes into account differences in hours worked, occupations chosen, education and job experience. For example, someone who takes time off (e.g. maternity leave) will likely not earn as much as someone who does not take time off from work. In the United States, for example the unadjusted average female’s annual salary has commonly been cited as being 78% of the average male salary, compared to 80–98% for the adjusted average salary. Wikipedia Gender pay gap 12 April 2019

You can also give the Guardian’s article What you need to know about gender pay gap reporting a read to understand the subject better.