posted in Feminist Fact Friday on 19 April 2019 by Susi 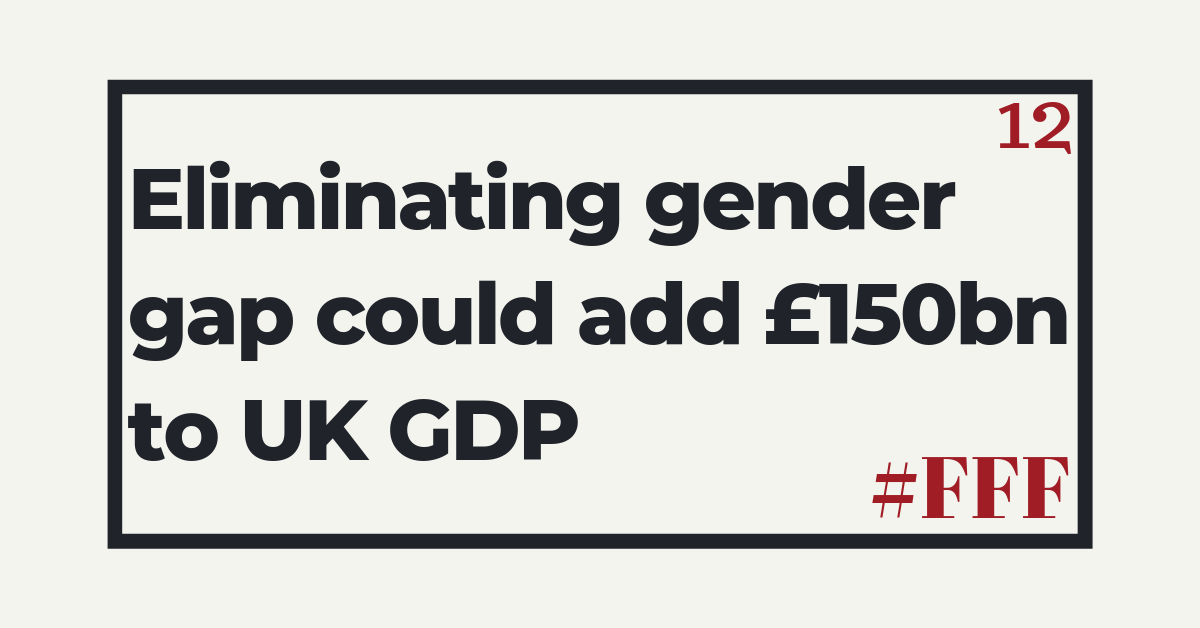 In previous #FeministFactFriday posts on MONEY I’ve covered some of the biggest ways in which women remain disempowered financially. These are broadly: being penalised for maternity leave, childcare and caring for elderly relatives–all of which take women out of the workforce in a way that leaves them unable to catch up. However, these are just three broad examples of life’s circumstances that manifest themselves in many, many smaller consequences: not being hired because you’ll be a maternity risk; not being promoted because you’re likely to take time out for childcare; being managed out once you return from maternity leave; taking on the majority of childcare work (because paid childcare is punitively expensive in the UK).

£150 billion in GDP could be added to the UK economy in 2025 if every UK region matches the pace of the fastest-improving region over the past decade. This is equivalent to ≥5% incremental GDP compared to 2025 forecasts in every UK region.

McKinsey The power of parity: Advancing women’s equality in the United Kingdom page 7

There is clearly an argument that “moving toward gender equality is a moral and social issue,”* though this isn’t enough for many people (who fail to even recognise economic inequality as an issue) so for those who struggle to see bridging the financial gap as being a good thing in and of itself, there’s McKinsey’s very powerful argument that once again, empowering women is good for everyone, not just women “it is important to future economic growth in the United Kingdom.”*

As the McKinsey report states, “The UK is ahead of peers on gender parity in legal protection and entrepreneurship. However, women are working in less productive sectors and occupations, and being paid less period” and so there are three things that need to be done to reach this £150 billion addition to GDP:

The unpaid work that women do isn’t simply a matter of ‘choice’. It is built into the system we have created–and it could just as easily be built out of it. We just need the will to start collecting the data, and then designing our economy around reality, rather than a male-biased confection.

Week 12’s fact focuses on just one example of how acknowledging the gender data gap and realising that the world is designed around men’s needs and contributions would improve lives for women–and for everyone.

There is plenty that can be done to get more women into work–and into higher paid work–beginning with improving the childcare situation in the UK. Childcare costs are incredibly high in this country and are one of the biggest reasons for keeping women out of paid work at the same levels as men.^

Read Invisible Women by Caroline Criado Perez. There is no better thing you could do right now than read this book in order to see the full extent of how the world around us is shaped for men and that by starting to include a new perspective and a new focus we can make everyone’s lives better.

Read the McKinsey report that led to this estimate The power of parity: Advancing women’s equality in the United Kingdom so that you can understand some of the causes in more detail.

Does anything within the three spaces that McKinsey identified fall within your current remit at work or in the community? For example, do you work in a sector that could welcome more women? Are you certain the women you know aren’t doing more than their fair share of care work or house work?

Where is your vote going? Do you keep gender equality in mind when you’re voting? For example, “In 2017 the House of Commons library published an analysis of the cumulative impact of the government’s ‘fiscal consolidation’, between 2010 and 2020. They found that 86% of cuts fell on women.” ** What’s more an “analysis of the impact of female representation across 19 OECD countries, between 1960 and 2005 also found that female politicians are more likely to address issues that affect women.” So, if you want to see things change you might want to change your vote–and consider the Women’s Equality Party while you’re at it.

If you find this month’s MONEY theme particularly compelling, check out the Women’s Budget Group for very detailed information on this theme.

* McKinsey The power of parity: Advancing women’s equality in the United Kingdom September 2016