posted in Feminist Fact Friday on 26 April 2019 by Susi 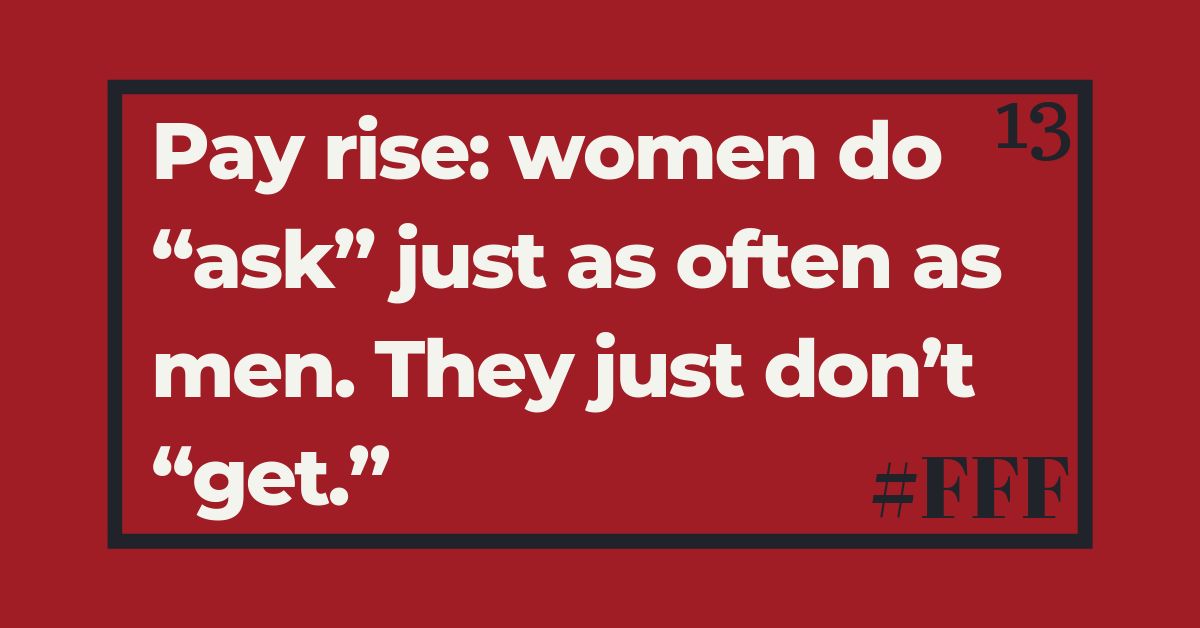 But “asking does not mean getting — at least if you are a female.”

I’m going to kick off Week 13 with a confession: I haven’t read Lean In.

Don’t worry, this is likely to be the last time I put a confession into one of my posts (and all things considered, that one certainly wasn’t TMI) but you’ll soon realise why I’ve made this one.

There’s a very common myth that prevails in the working world (nope, not the pipeline problem one, though that’s pathetically common too), which is that women don’t ask for pay rises.

One of our many problems is that we’re just too shy. Reticent? Self-effacing? Embarrassed. Anyway, whatever it is that’s wrong with women (and there’s so much) a lot of it leads to us not being brave enough to ask for pay rises. To be fair, we’re probably not really qualified for a pay rise anyway, but even if we were, we just don’t ask.

Except, actually, just like the ‘pipeline problem’ the ‘women-don’t-ask-for-pay-rises-problem’ is well, bullshit.

It’s a very convenient excuse [all together now: “just like the ‘pipeline problem’”] to add to the very many excuses for why women earn less and don’t progress as far.

So, as three researchers writing in the Harvard Business Review found, “Women who asked obtained a raise 15% of the time, while men obtained a pay increase 20% of the time. While that may sound like a modest difference, over a lifetime it really adds up.”

One of the best takes I’ve found on this subject comes from Otegha Uwagba writing in The Cut:

“Depressing as these statistics are, in a way I also find them weirdly satisfying, given that they challenge the idea that women are at least partially to blame for wage inequality as a result of their actions (or lack thereof). They also reveal an uncomfortable truth about society’s propensity to assign blame to women for situations outside their control. By buying into the “women don’t ask” narrative, employers who should be doing more to rectify gender pay gaps in their own organizations get to ignore their role in fostering said gaps, and pass the buck back onto us.”

Otegha Uwagba Actually, Women Do Ask for Money. They Just Don’t Get It 8 March 2019

So that’s where my confession comes in. I haven’t read Lean In, but I understand the premise.* And it’s a premise that has been very slowly receiving criticism. Though it was empowering for women in a lot of ways it placed the responsibility for solving systemic issues solely in the hands of individual women and ignored the ways in which strengths that women typically display aren’t valued.

* “Ask most women whether they have the right to equality at work and the answer will be a resounding yes, but ask the same women whether they’d feel confident asking for a raise, a promotion, or equal pay, and some reticence creeps in.”