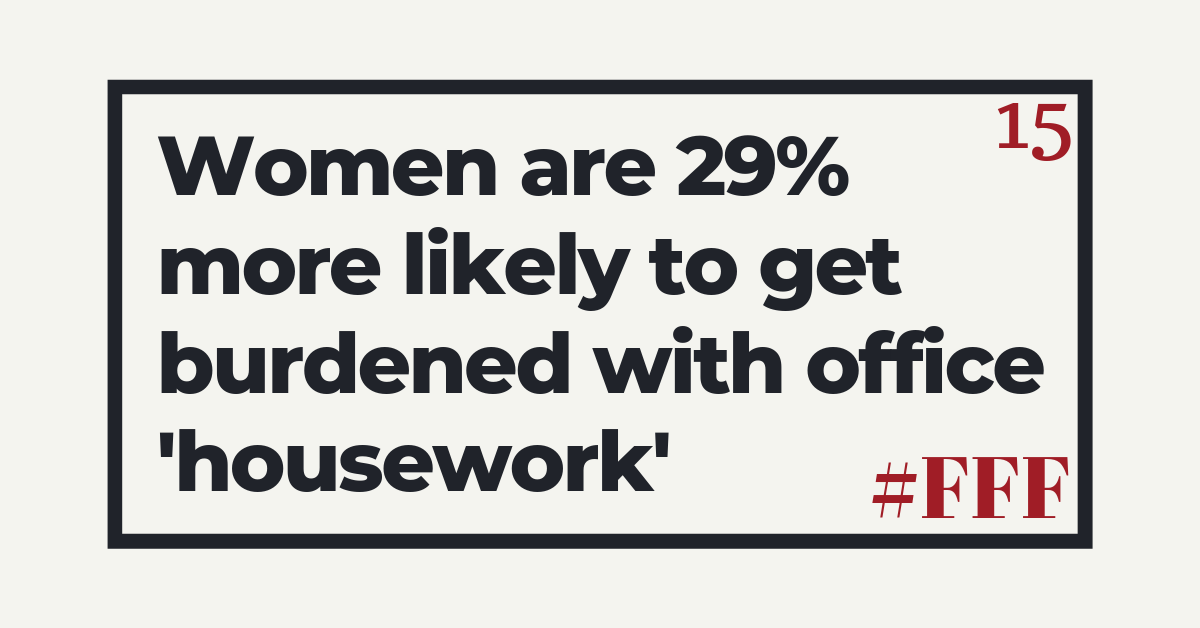 Women are 29% more likely to get burdened with office housework.

This month I’m examining BEHAVIOUR and inequality in the workplace. Last week I focused on how women’s actions are interpreted in a gendered fashion—they’re three times as likely to be called “too aggressive” and 1.4 times more likely to receive subjective feedback than men—and this week Feminist Fact Friday is looking at the ways in which women are burdened in the workplace with chores and ‘house work’ that do nothing to improve their career prospects and standing.

According to research published in the Harvard Business Review, across a range of industries and workplaces (from engineering through to law) “women were 29% more likely than white men to report doing more office housework than their colleagues.”

In every organization, in every field, there are multiple types [of work]. Some can set you up for promotion and skyrocket you to the top of your company — we call them glamour work. Other assignments are necessary but unsung. We call them office housework.

As with last week’s focus, it’s not just the way in which women are labelled or burdened that’s the problem—it’s the fallout that makes this a double punishment. In the case of office housework these chores need doing but there is no reward for doing them, and they take time away from doing high profile work that makes your career “Glamour work gets you noticed by higher-ups, gives you the opportunity to stretch your skills with a new challenge, and can lead to your next promotion. It’s the project for a major client, the opportunity to build out a new team, or the chance to represent the company at an industry conference.”

Further, as the researchers outline in HBR, women are penalised for trying to avoid these career-crushing chores and men just aren’t:

Moreover, because of these stereotypes, women and people of color are under social pressures to volunteer for office housework activities. They also risk pushback if they don’t take on these tasks (“She’s just not a team player” or “She thinks highly of herself, doesn’t she?”). And women are more likely to be assigned office housework because assigners tend to believe that women will accept the task.

White men are much less likely to be asked to do the office housework, and they experience less backlash if they decline to do it or simply do it poorly. Men can also get away with intentionally doing a bad job at a low-value task to avoid being asked to do it again. Because of prescriptive stereotypes, however, it’s riskier for women to employ this tactic of strategic sloppiness.

I’d like to take a moment to focus on the penalties for people of color as well. In this study they provide data on race and it’s clear that people of color receive far worse treatment than white men. Two particular statistics stand out to me and I’d encourage you to read the piece in full to get the whole picture:

Actually, a belief in meritocracy may be all you need – to introduce bias that is. Studies have shown that a belief in your own personal objectivity, or a belief that you are not sexist, makes you less objective and more likely to behave in a sexist way. * Men (women were not found to exhibit this bias), who believe that they are objective in hiring decisions are more likely to hire a male applicant than an identically described female applicant, and in organisations which are explicitly presented as meritocratic, managers favour male employees over equally qualified female employees.

So, start by examining your own biases and consider the fact that you might very well be behaving in a way that favours or disadvantages certain people. Remind yourself in particular of the statistics on people of colour – while you might be treating people fairly on a gender basis, that’s no guarantee that you’re treating people equally on the basis of other differences.

Next, the HBR article I’ve taken most of these facts from offers a long range of suggestions on how to combat this issue. These include pulling people up on their refusal to take on chores (or addressing the problem when they deliberate perform badly) as well as encouraging change at the meeting and task level. Please give the article a read, and you can check out some of their tools on Bias Interrupters.

Finally you can go back through previous Feminist Fact Friday posts to get more micro and macro actions and as I did in last week’s post I’d highly recommend grabbing yourself copy of Invisible Women or Sue Unerman and Kathryn Jacob’s The Glass Wall for more facts and strategies.

Joan C. Williams and Marina Multhaup in Harvard Business Review For Women and Minorities to Get Ahead, Managers Must Assign Work Fairly 5 March 2018