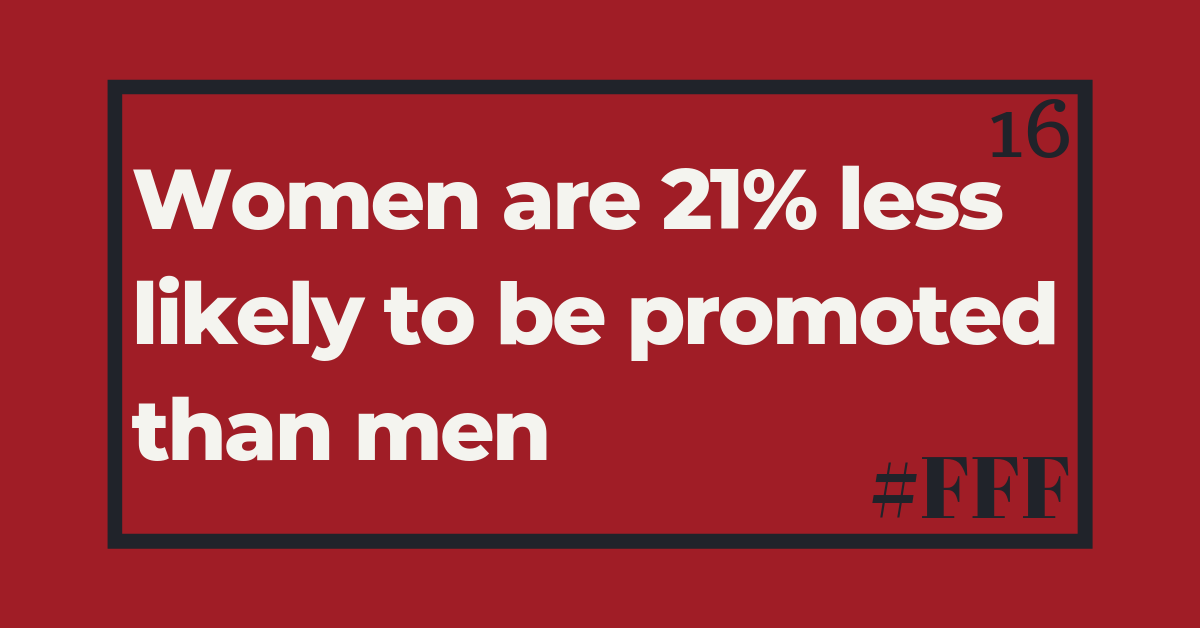 Women are 21% less likely to be promoted than men

This month in Feminst Fact Friday I’m focusing on BEHAVIOUR—all the ways in which women’s behaviour is judged more severely than men’s, or the way typically male behaviours are rewarded and typically female behaviours are penalised. Over the previous two weeks I’ve covered how women are more likely to be perceived as “too aggressive” (and penalised for it) and 29% more likely to be forced to take on office “housework” that does nothing to bolster their career prospects.

Where does this data come from? It’s in the most recent Lean In and McKinsey & Company Women in the Workplace report, covering 279 companies employing more than 13 million people, alongside 64,000 employees who were surveyed on their experiences. I’d urge you to take a look at the report in full, particularly as it breaks down experiences by sexuality, race and ethnicity too, giving a detailed view of the different levels of inequality. For example, for every 100 men who are promoted, only 79 women will be promoted – but for black women that figure sinks to a shamefully low 60.

Women continue to be vastly underrepresented at every level. For women of color, it’s even worse. Only about one in five senior leaders is a woman, and one in twenty-five is a woman of color.

I’m focusing on this statistic for the final article in my BEHAVIOUR series because it’s clear that this inequality continues in spite of women’s best efforts in the workplace.

Women are doing their part. They’ve been earning more bachelor’s degrees than men for decades. They’re asking for promotions and negotiating salaries at the same rates as men. And contrary to conventional wisdom, they are staying in the workforce at the same rate as men.

For every ten men in management, there are only six women – this is a self-sustaining imbalance as managers continue to hire people like them. And it’s particularly important that we combat this imbalance because “the two biggest drivers of the pipeline are hiring and promotions.” The report is peppered with qualitative and quantitate data that shows there is a chasm between how fair men and women perceive their workplace to be – which chimes perfectly with one of last week’s facts: “studies have shown that a belief in your own personal objectivity, or a belief that you are not sexist, makes you less objective and more likely to behave in a sexist way. ***

There are huge discrepancies in the way inequality is perceived and in the way it’s experienced and that’s down to having workplaces that remain unwelcoming to women and minority groups:

Women are less optimistic than men about their company’s efforts to curb inappropriate behavior. As one example, 32% of women say that disrespectful behavior toward women is often quickly addressed by their company, compared to 50% of men. […] 55% percent of women in senior leadership, 48% of lesbian women, and 45% of women in technical fields report they’ve been sexually harassed.

Fighting this continued bias is key to making the workplace a safer, more productive place for everyone. And though women start out in the careers just as ambitious as men, it takes just two years in a sexist company for that ambition to be knocked out of them as the appearance of carbon copy managers makes it clear that the women just don’t fit the mould. ^

As always: start by informing yourself. Read the Lean In and McKinsey & Company Women in the Workplace 2018 report (it’s not as dry as the word ‘report’ makes it sound), in particular the facts on minority groups and how badly they’re treated.

Go back through the previous Feminist Fact Friday themes, find a cause that makes you angry and then start finding a way to fight it, no matter how small.

Pick up a copy of The Glass Wall for further examples of men and women in the workplace and how differently they’re treated.

Wherever you work think about how you might be treating people differently. Reflect on the language you use to describe people or the opportunities you offer them. Whether you’re in management or not, you’re in a position to effect change just by calling out bias when you see it and thinking carefully about potential solutions. If you notice that you’re not seeing enough diverse candidates for new roles bring it up with HR, if you wonder why office housework is always going to women on the team then say something. If people use gendered language think about how you can point that out. ^^

Lean In and McKinsey & Company Women in the Workplace 2018

* For example, in Gender gap in UK degree subjects doubles in eight years, Ucas study finds “Women outnumber men in 112 of 180 degree subjects, with females from poorer backgrounds 50% more likely to go to university than their male counterparts”

^^ Michael J. Coren writing in Quartz Recordings of VCs talking about investments shows why women founders have such a hard time 23 May 2017