posted in Feminist Fact Friday on 28 June 2019 by Susi 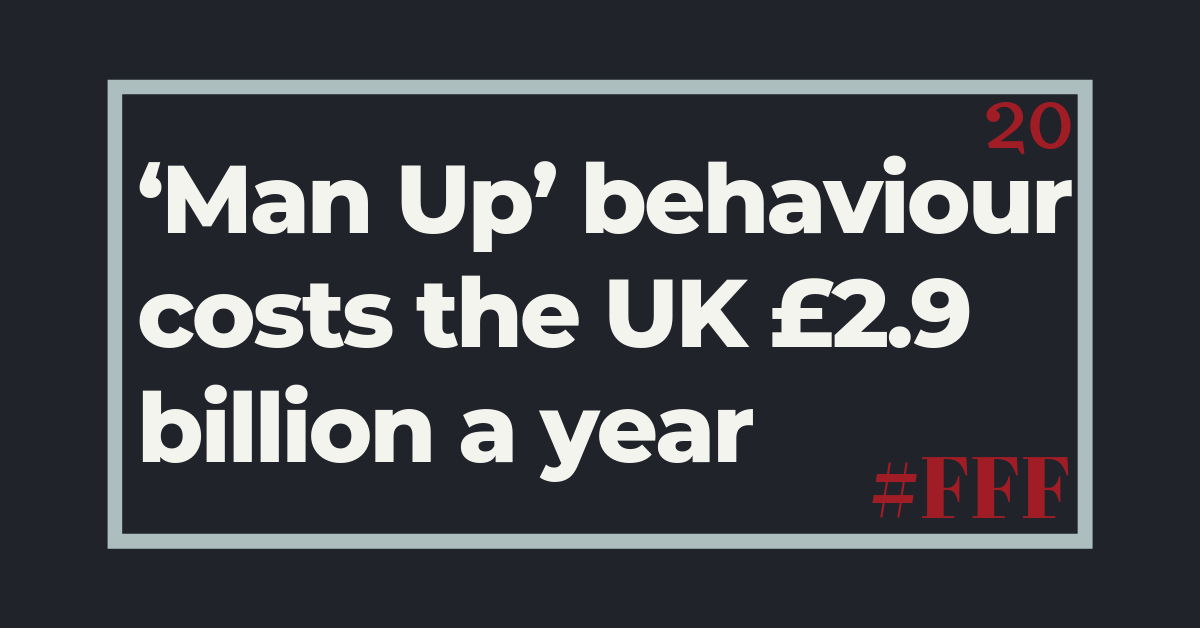 In writing this week’s Feminist Fact Friday I’ve borrowed liberally from the excellent Book of Man who covered a report from Promundo called ‘The Cost of the Man Box’.

As the previous weeks have shown, being a man correlates strongly with mental health issues and poor health, as well as inequalities in how men are treated as parents. ‘The Cost of the Man Box’ brings many of these measures together to make an economic argument for how harmful ‘man up’ behaviour is for men, women and society as a whole.

The question that Promundo sought to answer with this research was ‘if we were somehow able to remove all of young men’s bullying, violence, sexual harassment, depression, suicide, binge drinking, and traffic accidents that result from rigid masculine stereotypes, how much might we save as a society?’ And the answer – at an annual cost of £2.1 billion to the UK economy – is a shocking one.

The effects of the Man Box are severe, real, and troubling for young men and others in their lives. Our 2017 study showed that young men who hold the most rigid gender attitudes are: three to six times more likely to make unwanted sexual comments to women; about twice as likely to have had suicidal thoughts in the past two weeks; and two to three times as likely to have been responsible for traffic accidents recently; among other strong links. By and large, much of young men’s gender socialisation is undeniably destructive, often with deadly consequences.

In week 12 I covered estimates that combatting the forces of discrimination that stand in women’s way (broadly that they’re penalised for maternity leave, childcare and caring for elderly relatives) would add £150 billion to the UK economy. Promundo’s research and their £2.1 billion annual cost demonstrates that inequality affects both men and women.

This is important because as with the previous issues I’ve covered so much of this is avoidable if we all work on our behaviour and fight for change. Conversations around mental health are gradually improving, but for people who still doubt that the issue is as serious as it is, putting a stark case for the economic impact is another lens through which to interpret this problem and galvanise a response. As the authors say:

By highlighting the negative economic implications of the Man Box, we hope to inspire increased social dialogue and policy change that can lead to significant transformations in our social norms about gender. We want to continue to broaden the growing conversation on the harms of rigid masculine stereotypes, and ultimately to dismantle society’s restrictive definitions of what it means to be a man.

According to the report there are at least five influential groups and levels of changes needed and Promundo is calling for:

Depending on where you sit in the list above, I’d consider reading up on of those issues and figuring out where you can make a difference. The authors of this report, Promundo are a great starting point, as is The Book of Man, and my previous writings on the MEN theme.

Though the figure itself is tough to see and the issues are serious, Promundo’s writing is actually inspiring and uplifting as they offer solutions and ways in which we can all make a difference. Please give the Book of Man article a read, particularly towards the end when the author talks about a hopeful vision of the future:

In place of the tenets of the Man Box, an aspirational set of characteristics [for men] would include care, empathy, emotional intelligence, connectedness, authenticity, collaboration, dedication to a cause, and comfort in being oneself. In order to foster these characteristics, we have to do away with assertions like “be a man” or “man up” and instead affirm one another with language like, “you matter,” “I support you,” “you are loved,” and “I appreciate you.”