posted in Feminist Fact Friday on 12 July 2019 by Susi 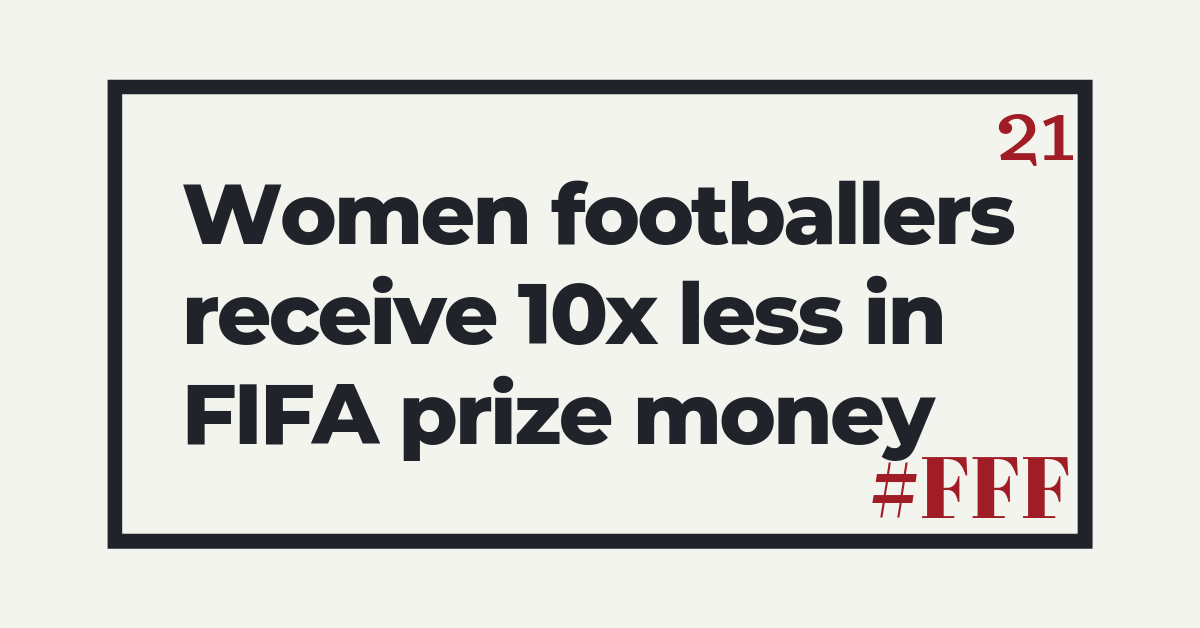 This month I’m writing about SPORT – a topic I know far less about than anything I’ve covered so far. As I wrote in my introduction, while this might not be a sphere of life that I feel passionate about, it is one that obsesses athletes and viewers across the world and is only increasing in popularity, as global sports sponsorship is predicted “‘to hit £35bn’ in 2019.” It’s a theme that resonates with billions of people worldwide.

With the Lionesses having recently taken our nation by storm once more and the US women’s football team seeing their Sunday victory greeted by chants of ‘equal pay!’ it’s safe to say that not only is women’s football growing in popularity, its viewers are also growing in political awareness.

As the BBC outlined in their coverage of the gender pay gap football:

The winning US team in France received $4m (£3.2m), double the amount of the previous tournament in 2015.

In total, Fifa awarded $30m (£24m) to the competing teams in the women’s tournament.

One interpretation that has been popular on the internet in recent days is the following from Laura J. Nelson, no doubt because a common refrain around women’s sport has been that women lack the skill that men possess or simply aren’t as interesting to viewers – and therefore are worth less.

Actually: The full chant is “equal pay for equal work,” so pay the women more.

The women’s national team is currently suing US Soccer for pay discrimination, and according to this lawsuit the men’s team received $5.375 million in bonuses after losing the 2014 World Cup, while the women’s team received $1.725 million in bonuses after winning the 2015 World Cup. Clearly in this case you’re damned if you do and damned if you don’t, because even while the women’s team has been outperforming the men’s team for years, neither pay nor recognition have fully caught up to that reality.

The lawsuit continues a years-long battle between the women’s team, which has vaulted in status while winning the World Cup three times, and U.S. Soccer over the players’ compensation and treatment compared with that of the men’s team, which has accomplished far less, never winning a world title and failing to qualify for the most recent World Cup.

This example of gender pay discrimination is important because it serves as an opportunity to pause and question long-held beliefs. If you’re someone who has long maintained that women make inferior athletes or that, even if they can be just as good as men (in their own way) people just aren’t as bothered about seeing them perform, are you confident that they’ve been given the same opportunities as men to shine? Have they been offered the same sponsorship, the same salaries, the same fame and glory and help with recovery and coverage time? Did women start out on a level playing field and show they just weren’t worthy? Or did they never start off on equal footing?

Go back through previous editions of Feminist Fact Friday and you’ll find multiple examples of people believing they’re more objective than they are, expectations being different for women than men, and women being judged far more subjectively. My money’s on this being exactly the same for women athletes.

Try to get more involved in sport yourself (breaking down your own barriers) and encourage your friends to take part too. Campaigns like This Girl Can are excellent at pushing for this kind of change.

Go back through previous editions of Feminist Fact Friday for more information on how women are treated differently and their behaviour is interpreted differently – this kind of research goes a long way to explaining the continued bias in sport.

Check out the UN’s Women In Sport research to learn more about the importance of getting everyone involved and how empowering it can be for women.

Campaign for pay equity in your own sphere of life, whether that’s paying your kids the same pocket money or asking your company for their gender pay gap report.

Reality Check team writing for the BBC, Women’s World Cup: What is the pay gap? 8 July 2019