posted in Feminist Fact Friday on 26 July 2019 by Susi 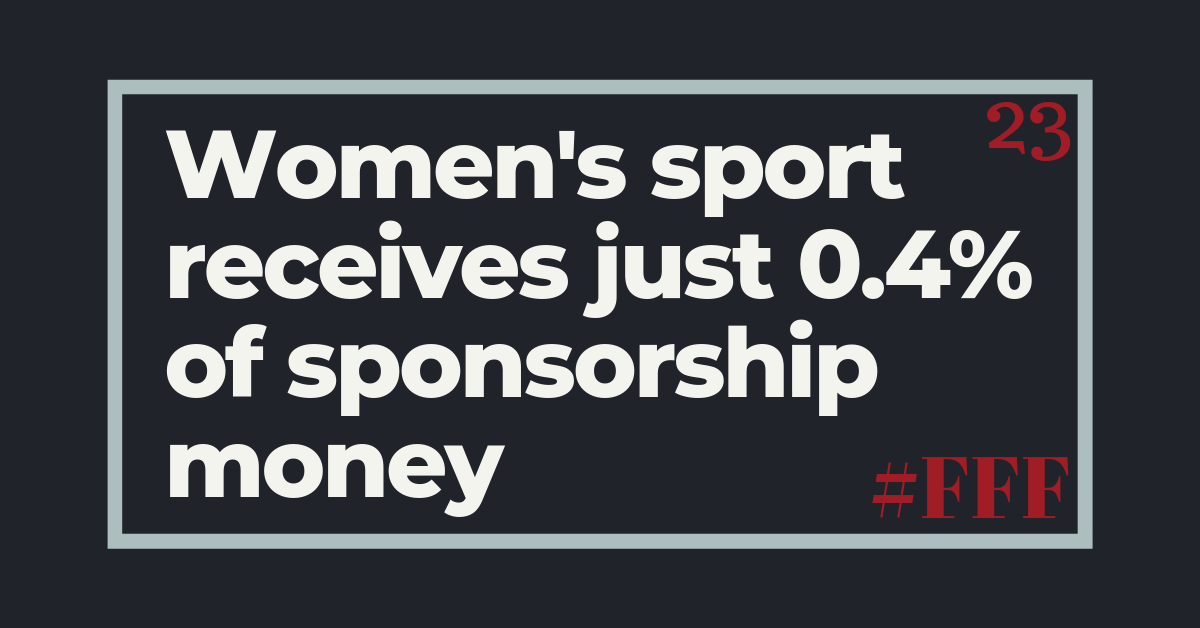 This month I’ve taken a close look at gender differences in SPORT, covering the vast differences in prize money (women footballers receive 10x less in FIFA prize money) and the gulf in media coverage (women receive just 10% of sports coverage) and I’d like to finish this theme with a post on how little sponsorship women get.

As outlined in Marketing Week, the majority of brands have been extremely slow to see the potential in women’s sport:

Brands remain reticent to embrace the opportunities of women’s sports. The most recent figures date back to a study of the market between 2011-2013, which found female sports account for a mere 0.4% of total sports sponsorship. To put that into perspective, global sports sponsorship was worth $106.8bn over those three years, but just $427.2m was spent on women’s sport, so there’s huge opportunity for growth.

Often when pay disparity or inequality is raised, critics reply resentfully that there is no ‘right’ to this money or that it needs to ‘earned’ – and as I’ve outlined in previous posts this interpretation deliberately (or naively) ignores the way in which men’s and women’s work is valued very differently, * which is no doubt one of the largest contributing factors to the way in which there is not a single industry in which women are paid more than men (see Financial Times below). **

However, an additional perspective is necessary in addressing the weakness of an argument that states that women need to work harder than men to prove even half their worth and that’s the way in which this is always viewed as a zero sum game; that rebalancing the investment made in both men and women means taking away from the men to give to the women. It ignores the opportunity inherent in taking women seriously and the fact that investing in women will increase the returns and size of the pot – not purely take money from an existing and finite pot.

As I already outlined in last week’s post, women’s sport is seeing considerable popularity and high viewing figures in spite of the trouble viewers have to go to to find coverage and the poor investment that has been made in women’s sport meaning they’ve had an uphill battle to upskill.

Brands that see women as an investment rather than a cost (and rather than something that detracts from the men’s game, women are something that adds to sport overall) are clearly looking beyond the false narrative of women needing to prove themselves (which they’ve long ago managed) and recognising that with the right investment they’ll more than make their money back. For example, according to research from Nielsen:

And the brand recognition statement is particularly significant as it’s well known that brands struggle to distinguish themselves against rivals and create cut-through in crowded markets. Those sponsors who have recognised the potential in women’s sports include Investec, Kia, Vitality, Nike and O2, and thankfully they’re part of a growing roster of companies waking up to women’s potential. In the same Nielsen report quoted above between 2013 and 2017 we’ve seen a 37% increase in the annual number of women’s sports sponsorship deals announced and a 49% increase in average monetary size of deals.

According to the BBC and brand valuation consultancy Brand Finance “the total potential worth of sponsorship in women’s football globally is undervalued by over $1bn” – and that’s just for football, so we’ve got a long way to go before we can beat the original 0.4% sponsorship figure that this week’s post is concentrating on, but there is light at the end of the tunnel.

As I do every week, I’m suggesting a few different things you can do to be part of the solution. Recognising discrimination and inequality can be paralysing and overwhelming so as always, here are some big and little things you can do to bring back a feeling of control, contribute something positive to the issue and help move all of us along on the path towards progress.

As I outlined in previous posts for this month, one of the best things you can do is to tune in for women’s sports and continue to prove its popularity. As Netfluential’s research on 10,000 UK residents highlighted, there’s a strong view that better coverage of women’s sport has a positive effect on people’s participation in sport:

There is widespread recognition that making women’s sporting events more visible would have a positive impact on participation, with 71% of UK adults agreeing that showing more women’s sport on TV would be good “because it will have a positive effect on girls and women taking part in sport”. Two thirds also think that “it is important that the media shows as many women and girls playing sport as boys and men”. However, only 29% agree that there are currently enough female role models in sport, suggesting that broadcasters still have some way to go to meet the growing expectations amongst sports viewers for greater diversity of athletes.

The greater the coverage, publicity and popularity that women’s sport receives, the stronger the case for better investment. So if this is a cause you care about, start watching women’s sport or even take up a new activity yourself for the first time (or return to something you loved previously but hasn’t been a priority for you recently).

If you agree with the investment in women’s sports put your money where your mouth is and buy those brands or let them know you love their stance (social media’s your friend).

Currently “only 60% of top-flight women’s football clubs globally have shirt sponsors that are different to the men’s equivalent” so get out there and buy the kit to show your support too. ^

Go back through previous Feminist Fact Friday posts to brush up on the past six months of themes and feel free to even suggest a topic I should cover in future – I’m always keen to learn something new.

See you next week!

* ““A 10% increase in proportion female is associated with .5% to 5% percent decrease in hourly wage in each decade,”” Stéphanie Thomson writing for the World Economic Forum The simple reason for the gender pay gap: work done by women is still valued less 12 April 2016

Nielsen The Rise of Women’s Sports 2018