posted in Feminist Fact Friday on 2 August 2019 by Susi 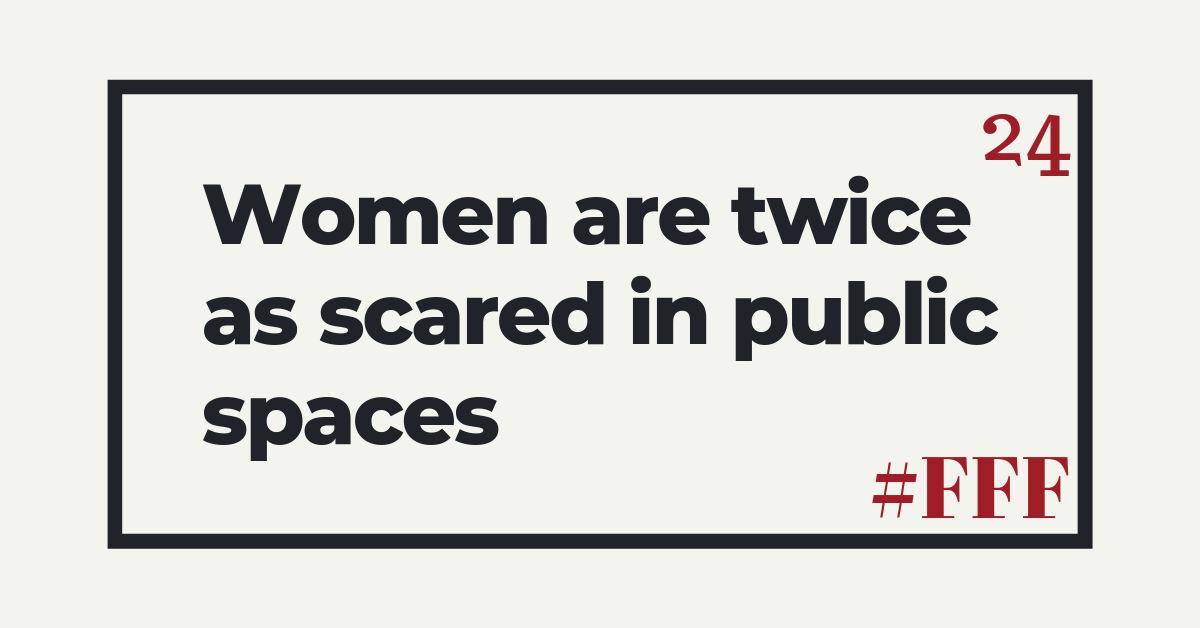 In my introduction to this month and the theme of VIOLENCE I wrote about the clear progression I want to cover in the five weeks of one of my gravest subjects to date.

I’d like to note from the outset that much of this post (as with so many others) owes a debt to the excellent Invisible Women and as I’ve written many times before, I’d strongly encourage anyone reading this to buy a copy of their own.

Critics may believe that talking about feelings, or a sense of fear really isn’t serious enough. It may feed into stereotypes they already hold about women (and how they are typically criticised as being more emotional, or historically have been viewed as more fragile), or they may think that it’s unreasonable for women to be scared considering the fact that ‘the official statistics show that men are in fact more likely to be victims of crime in public spaces’ * But that’s according to statistics that take violence against men seriously and take threatening behaviour against women as par for the course, or even see it as being non-existent. As Criado-Perez writes ‘women don’t report these behaviours, because who could they report them to?’

As women navigate public spaces they are also navigating a slew of threatening sexual behaviours. Before we even get to the more serious offences like being assaulted, women are dealing on a daily basis with behaviours from men that make – and are often calculated to make – them feel uncomfortable. Ranging from cat calling to being leered at, the use of ‘sexualised slurs [and] requests for someone’s name,’ none of these behaviours is criminal exactly, but they all add up to a feeling of sexual menace. A feeling of being watched. Of being in danger – and in fact, these behaviours can easily escalate. Enough women have experienced the sharp shift from ‘Smile, love, it might never happen,’ to ‘Fuck you bitch why are you ignoring me? to being followed home and assaulted, to know that an ‘innocent’ comment from a male stranger can be anything but.

I will demonstrate later in this month that this fear is grounded in a very real appreciation of the dangers women face, from stalking and sexual harassment, through to assault, rape and murder. But before we get as far as that I’d like us to begin with seeing this fear as sitting on a very real spectrum and make the main point that women are prevented from experiencing society on the same terms as men, purely as a result of the (veiled) threats that remain a constant backdrop to their presence in public space.

It’s not simply that there are spaces women can’t enter, it’s that they have to adapt their behaviour in so many ways in order to manage potentially dangerous situations. So before we’ve even reached actual physical harm (as I’ll describe in later weeks) women’s lives have been adversely affected for no other reason than their gender.

Whether it’s the fact that women have learned to be more sensitive than men to the potential danger of an environment (‘social disorder, graffiti, and unkempt and abandoned buildings’ are all signals women pick up on) or the ways in which women ‘avoid specific routes, times and modes of transport [or] avoid travelling at night’ or even the ways in which ‘fear of crime is amongst the most important reasons women choose not to use public transport’, women are forced to behave very differently than men. ** Women go as far as taking longer, more circuitous routes home, only travelling while accompanied and even quitting jobs to avoid dangerous situations.

But before you get confused and go down a route of needing to educate women, perhaps offer them a self-defence class or give them a stern talking to, as Criado-Perez writes ‘Clearly, there is an injustice here. But all too often the blame is put on women themselves for feeling fearful, rather than on planners for designing urban spaces and transit environments that make them feel unsafe […] The invisibility of the threatening behaviour women face in public is compounded by the reality that men don’t do this to women who are accompanied by other men.’ ***

This fact around fear – that women are twice as scared as men in public spaces – is proof of the way in which women’s behaviour and presence is unjustifiably limited. And it’s another example of invisible discrimination. Just as women’s low presence in the media goes unnoticed or their lack of representation in parliament or at the head of companies is dismissed as ‘having always been that way’ we accept that women are scared in public and then behave as if there’s nothing that can be done about it – men are dangerous, women should protect themselves, job done. The responsibility doesn’t lie with women to keep themselves safe – the blame lies solely at the feet of the perpetrators and of systems that fail to recognise the danger they represent and to react accordingly.

In the following weeks’ posts I’ll go into more detail on how the system continues to fail women and how a world view that blames women for the violence perpetrated against them totally fails everyone.

Buy a copy of Invisible Women: Exposing Data Bias in a World Designed for Men by Caroline Criado-Perez. And after you’re done reading, buy a copy for everyone you’ve ever known.

Donate to any number of women’s charities, bodies and parties that are there to protect women, from advocacy (the Fawcett Society) to political representation (Women’s Equality Party), and protection: Refuge, Women’s Aid, Rape Crisis (and even more here).

Get ahead on some of the myths that this month’s theme will be trying to dispel (such as where blame for violence lies – hint: it’s never the victim’s fault). This piece from Rape Crisis is a good starting point.

Read back through previous Feminist Fact Friday posts to educate yourself or help to shape a more realistic world view on just how pervasive and damaging sexism is – it permeates every facet of our lives and violence against women and girls is one of the worst manifestations of what is a wide-ranging problem around the world.

*** Invisible Women: Exposing Data Bias in a World Designed for Men by Caroline Criado-Perez, pages 54 and 55