posted in Feminist Fact Friday on 16 August 2019 by Susi 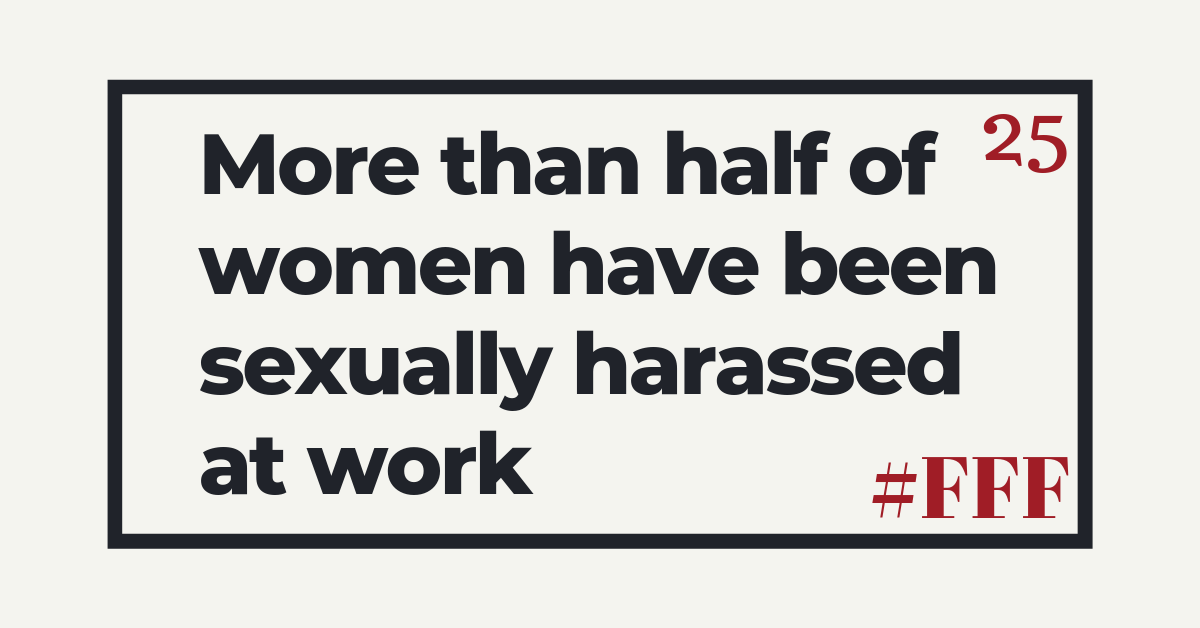 “Girls learn from a young age that they have to do things to avoid drawing attention to themselves. We do work to try and make sure we’re safe, and we’re made to feel responsible when we’re vulnerable. This film shows the changes women are making to how they move about in public to try to avoid abuse, and the devastating impact on the freedom of women in the UK today.”

In outlining the theme for August, VIOLENCE, I made clear that I would be focusing gradually on the escalation from threatening language and environments, through to threatening actions and then their grave consequences. This is one of the toughest topics I’ll be covering in Feminist Fact Friday and I believe it’s important to establish from the outset that this behaviour exists on a continuum that we all need to take very seriously. As I’ve written before ‘if you’re not part of the solution, you’re part of the problem’ and it’s clear to me that it’s inappropriate to laugh off diminishing, sexist and threatening language, because it excuses and diminishes the acts that naturally follow.

There’s a common interpretation around sexism, racism and other forms of prejudice that suggests that discrimination is only committed by those kinds of people. Only bad people discriminate. And because I’m/you’re/they’re not a bad person, my/your/their behaviour can’t be discriminatory. So threatening language is just words that exist in a vacuum and shouldn’t be taken seriously. This interpretation means that when women are twice as scared in public spaces (as I wrote about in week 24) and when half of women have experienced sexual harassment in the workplace, we look to the victim and blame them for their fear or their reaction, rather than thinking about what the perpetrators should do to stop their behaviour.

That women are twice as scared in public spaces, and that more than half of women have been harassed in the workplace shows this is a far too common problem and one that cannot be dismissed. It’s on all of us to make it clear that public space/workplace/home and any space in between should be safe for all of us. Women and other affected groups shouldn’t have to adapt their behaviour – instead the casual perpetrator who has been confident up to now that their behaviour will go unpunished needs to face the consequences of their actions.

Here is a sprinkling of findings from the TUC, which goes to show the range of harassment perpetrated against women in the workplace:

One of the hardest parts in writing articles for this month’s theme hasn’t just been having to read the tough details on harassment and violence against women, it’s also been choosing the most appropriate statistics – the truth is that we’re deluged by statistics on how bad violence – from language through to murder – against women truly is. The only surprise is that it continues to receive so little recognition as the pervasive and interlinked issue that it truly is. At this stage I’d like to mention the following research:

This is a demonstration of just some of the serious statistics around harassment of women and what I hope will give critics pause for thought before croaking out the usual (unwelcome) refrains of:

Women will not be safe until men change sexist, abusive behaviour

The fact that four out of five women who experienced harassment weren’t able to report to their employer shows that there are so many things wrong with our current systems.

So, you can begin by acknowledging that this is a problem – and that something can be done about it. Start by reading the TUC’s Still Just a Bit of Banter? report because getting familiar with the evidence and arguments is key to breaking through denials and answering those people who are always seeking to distract from this issue or make out that it’s less serious than it is. The report makes clear a number of things that government and employers can do to combat sexual harassment in the workplace and these are all worth a read, but I’d like to argue that fighting against the prevalence of harassment isn’t just about the workplace (though this article began with that fact) but rather about how we view sexism, discrimination and abuse in all its forms across all of society.

If you need inspiration on how solutions can be found, have a read of this piece in the Guardian What would a city that is safe for women look like? because at the heart of the solutions to issues such as the prevalence of sexual harassment of women is firstly recognising that the issue exists, and secondly framing the issue in a way that considers how we would behave if we didn’t assume that the behaviour was normal and therefore insurmountable. Just a few of the methods that have improved women’s lives dramatically have been: the launch of SafetiPin which has seen 90% of the lighting deficit in Delhi fixed; the the redevelopment of Plaça de la Llibertat near Barcelona which saw women actually consulted on their needs ahead of work; and the work of No Means No in Nairobi, where three-quarters of boys trained by the organisation have successfully intervened in a violent or sexual assault on a woman.

We need to internalise the fact that women should not feel twice as scared in public spaces; nor should half of women have experienced sexual harassment in the workplace; a third of women shouldn’t have been harassed while out jogging. We all have a role to play in fighting this behaviour, and as the YouGov/EVAW survey showed, “only 11% of women reported that someone else intervened when they experienced unwanted sexual touching in a public place, while 81% said they would have liked someone to do so.”

As Morela Hernandez writes “men, by virtue of their majority position, have a unique opportunity to directly combat gender discrimination” but I believe that statement is true for anyone of privilege or in a position of power. ** Educate yourself. Hernandez’s piece Gender Discrimination Still Exists — Now What? offers helpful examples of how to confront discriminatory behaviour and if it’s something you struggle with (particularly if you’re standing up to someone in a position of power, after all the TUC’s research showed that one in five women have been harassed by their direct manager or someone else with direct authority over them was the perpetrator), then begin with small actions that will help you build up to truly intervening.

And if you’re struggling to see just how absurd it is to constantly lay the blame at women’s feet, have a read of this excellent piece from Harriet Hall in the Independent Instead of telling women to avoid being harassed, maybe we should just tell men to never leave the house. Every time we tell women to adopt safety measures, rather than telling men to stop their harassment we reinforce the idea that the victim is responsible and to blame for the actions of the perpetrator. For example, telling women to be careful in public will do nothing to stop the 90% of rapists who are known to their victims.

Finally, I’m writing this just a week after Emma Watson launched the UK’s only sexual harassment helpline for women in the UK. Spread awareness of the helpline, use it yourself if you need to, and support its work if you can:

Trades Union Congress and Everyday Sexism Still Just a Bit of Banter? Sexual harassment in the workplace in 2016 2016

Olivia Petter in the Independent POLICE TELL WOMEN TO AVOID HARASSMENT ON A RUN BY JOGGING IN GROUPS, BACKLASH ENSUES 30 January 2019

* Lucy Clarke-Billings in Newsweek U.K. WOMEN ENCOURAGED TO RUN IN GROUPS AFTER SURVEY FINDS A THIRD OF FEMALE JOGGERS HAVE BEEN HARASSED 11 January 2017