posted in Feminist Fact Friday on 23 August 2019 by Susi 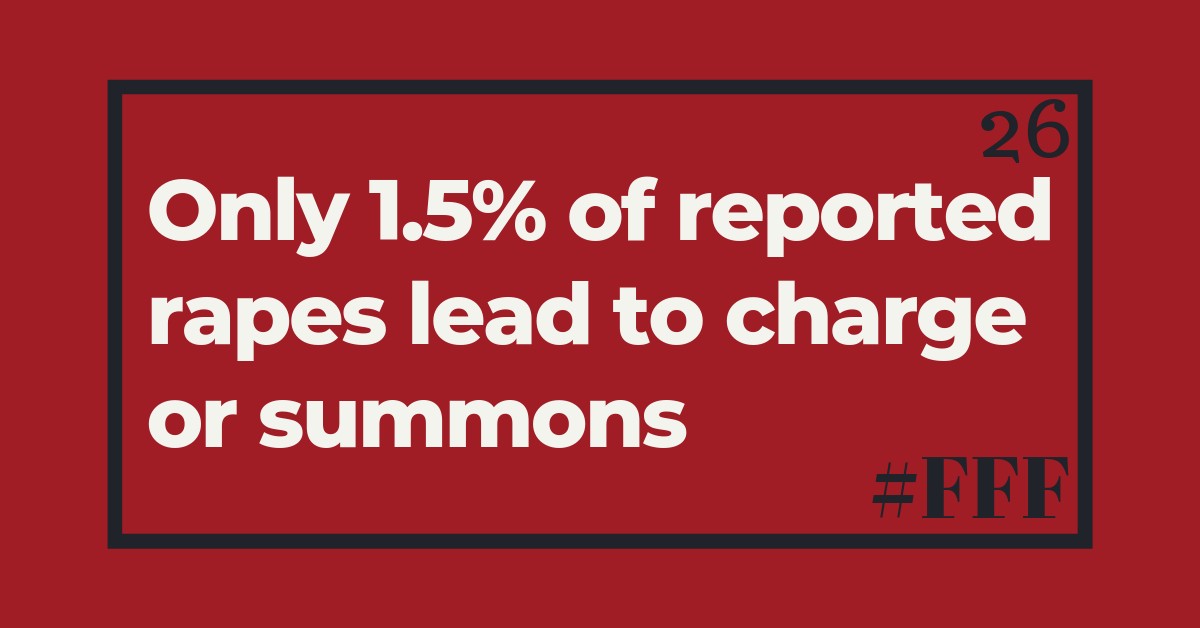 In reflecting on this topic before I started writing, there were a few things that came to mind, having heard long ago how low the number of falsely reported rapes is, how the majority of rapes are by rapists known to the victim, how high the number of rapes is – and yet how low the rate of reporting is – and finally how damned low the prosecution rate is.

The things that came to mind were a perfect blend of Hannah Arendt’s coining of the term ‘banality of evil’, which she used in the title of her book Eichmann in Jerusalem: A Report on the Banality of Evil; Vultures by Chinua Achebe which I still remember reading as a GCSE student over a decade ago; and the Stanford rapist whose crime continues to haunt those who have read Emily Doe’s victim impact statement. Why did these three come to mind? Exactly because with 646,000 sexual assaults annually, 50k rapes (these are just UK figures) and where 90% of the perpetrators are known to the victim, there is no way of escaping that we all come into contact with rapists who have gotten away with their crimes – our colleagues and friends and family and neighbours. And because violence against women is such an acceptable backdrop to our lives we’re content to only fight back slightly, to prosecute the worst, most easily proven cases and not change any of the broken elements of the system – such as the way women aren’t believed, the way they’re harassed in court and the way any number of personal materials from counselling notes through to personal messages can be used to manipulate the facts against them.

It’s important to note that the ever-low prosecution rate and the fact that it has even lower lies in the context of terrible prosecution rates as a whole – thanks to budget cuts and underinvestment in the justice system – however the egregious and recent drop from 14% of cases to 1.5% of cases being charged is, as the End Violence Against Women Coalition argues it, “in effect, “a decriminalisation of this extremely harmful crime.””

The drop is particularly dramatic at a time when victims are reporting more attacks.

The extent of the fall emerged as separate Ministry of Justice figures showed that victims of sexual assault were being forced to wait longer to secure justice in the crown court.

Owen Bowcott and Caelainn Barr writing in the Guardian Just 1.5% of all rape cases lead to charge or summons, data reveals 26 July 2019

In a 2017 article in the Times (apologies, it’s hidden behind their paywall) Caitlin Moran wrote an article that has stayed with me ever since

I want to ask my male friends, “So – have you ever raped anyone, then?” Because the understanding I have of all my male friends is that they could never, ever rape someone. Ever.

Here’s the thing I can’t square: no men I know seem capable of rape. Not my husband, my brothers, my father or my friends. And yet rape is, time after time, presented as something any man could do – if the evening were wild enough, and the woman confused/confusing enough.

If you get the opportunity to read the piece in full, I’d highly recommend it because Caitlin perfectly sums up the tension of living in a world where one in five women will be sexually assaulted simultaneously to us not knowing a single person we could ever imagine capable of such a terrible act.

Time and again over the course of Feminist Fact Friday, through POLITICS and HEROES and MONEY and BEHAVIOUR and MEN and SPORT, and now VIOLENCE, one of the tropes has been needing to prove that an issue even exists. I’ve returned repeatedly to the former leader of the Women’s Equality Party who was described thus “in her soft Scottish accent she recalls the battles she’s fought during her leadership to debate (and here she performs camp air quotes) “women’s issues”: before she can discuss a problem, she must first prove it exists” and as we arrive now at Week 26, at the halfway point for #FFF, it’s time to talk about how me asking every week, rhetorically, ‘why is this important?’ is a question I could only ever ask of women’s issues (or BAME issues, or disability issues etc), because we’re forever having to justify our existence and the time and space we take up.

As the End Violence Against Women Coalition stated “The drop is particularly dramatic at a time when victims are reporting more attacks. Four years ago one in seven or 14% of cases led to a suspect being charged or summonsed – a total of 4,908 in 2015-16. Last year fewer than one in 65 reports of rape (1.5%) resulted in a charge or a summons, for a total of only 886 in 2018-19.” So, while society is changing and victims are becoming more comfortable with coming forward our systems are refusing to help them and change too. During this period only 8% or reported crimes saw a charge, marking a truly difficult time for justice in the UK, but no-one who follows any thread on inequality will be surprised to learn that rape and sexual assault have the lowest charge rate.

So, even though this shouldn’t need to be stated, the fact that only 1.5% of reported rapes have been prosecuted in the most recent round of available statistics shows that violence against women continues to not be taken seriously; that we’re complacent and accepting rather than putting in measures to bring an end to this terrible situation.

Destroy myths. In a March 2013 report to the Director of Public Prosecutions (Charging perverting the course of justice and wasting police time in cases involving allegedly false rape and domestic violence allegations*) they found that during a period with 5,651 prosecutions for rape, there were 38 prosecutions for making false allegations, the majority of which That’s 0.67% of the rape prosecution number – which is already a tenth of the number of reported rapes. The next time someone warns you of slippery slopes, or damaged reputations think about how they’re telling you that 38 false allegations are equal to 50,000 reported rapes. There are so many more myths than this one, but it is one of the most pervasive and subject to serious gaps in perception. It’s 2019, so visit Rape Crisis and Wikipedia to learn more – or, you know, continue to believe the world is flat and vaccines cause autism.

I still remember sitting on a train going through South London when I first read Emily Doe’s victim impact statement. Re-reading the letter doesn’t lessen its impact. If you are struggling with empathy or to get your head around a perspective other than your own – as I implore readers to do every week – I’d recommend starting there.

Gina Martin is the perfect example of how a determined person can make change in the law happen. Her efforts at making upskirting illegal are an inspiration to all of us and I hope will serve to inspire someone else reading this to make changes to the law happen and to hold more people accountable. Her book Be The Change: A Toolkit for the Activist in You is a good starting point if you’re not sure how to fight. And there are plenty of examples of the way in which the law is not at all on the side of the victim – “an investigation by the Guardian revealed that police may also ask for a wide range of other records from victims at the time of reporting a rape. This can include sensitive personal records including medical, counselling, social services, mental health and education records” – and in fact very much discriminates against women by blaming them for the rapists’ actions. *

Finally, I’m going to repeat my tips from the last two weeks:

Lizzie Dearden in The Independent Only 1.7% of reported rapes prosecuted in England and Wales, new figures show 25 April 2019

Caelainn Barr in the Guardian Why has the charge rate for rape fallen in England and Wales? 26 July 2019