posted in Feminist Fact Friday on 30 August 2019 by Susi 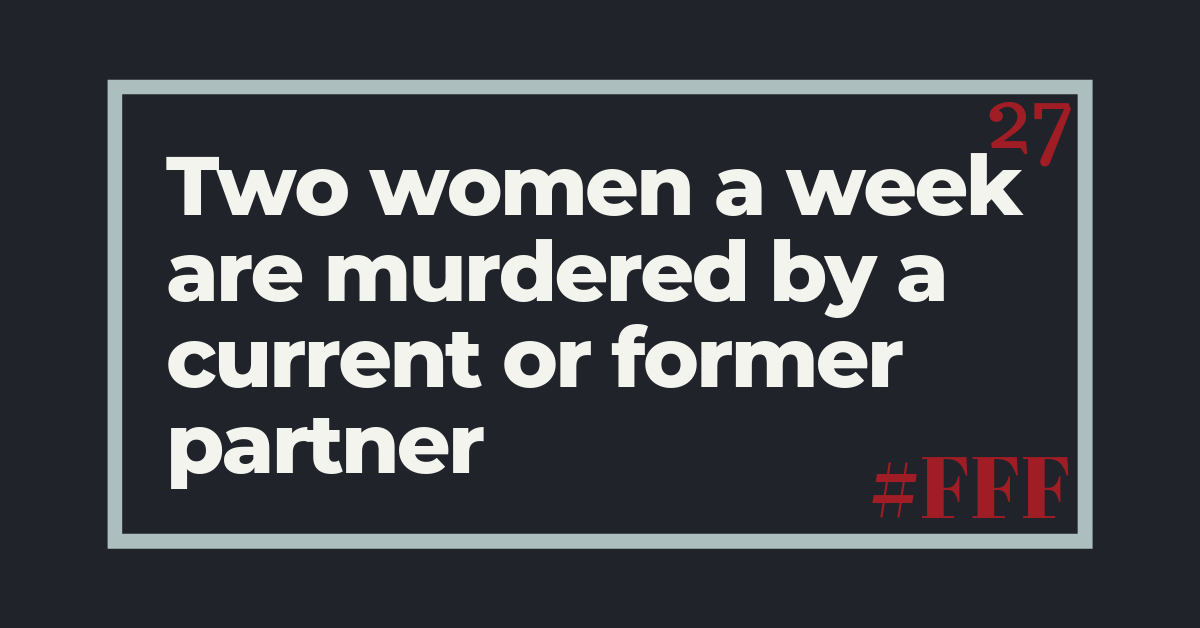 This week there were a number of sources I turned to in thinking about violence against women. The more stories I hear and read, the more the human consequences of this violence stand in stark contrast to the action society is taking to combat this threat. File On 4’s episode Hidden Figures? The True Scale of Military Sexual Allegations was just one such example. Progress might be made, but only at a snail’s pace, and while we wait another woman is murdered.

Last week in Feminist Fact Friday I reported on what the End Violence Against Women Coalition considers to be the effective decriminalisation of rape, as the shockingly low rate of just 1.5% of reported rapes leading to charges was revealed. As I wrote at the beginning of this month’s theme (VIOLENCE) I wanted to chart the transition from violent language through to violent acts and this week is that culmination. On average two women a week in England and Wales are murdered by a current or former partner. In fact, domestic violence accounts for 16% of violent crime, 1 in 4 women will fall victim to it in their lifetime and domestic violence has more repeat victims than any other crime. * Though men remain overall the bigger victims of violent crime, this is often anonymous violence – 76% of women killed by men in 2017 knew their killer. **

We live in a world where women are twice as scared in public spaces, more than half of women have been sexually harassed at work, rape and sexual assault goes unpunished and finally two women a week will be murdered by a former or current partner. With each step along this violent path perpetrators are taught that there are no consequences to their actions.

This needs to change.

This situation is entirely preventable. As with so many of the egregious examples I’ve shared over the past seven months we don’t have to accept violence against women. It doesn’t have to be a fact of life.

Take the example of the Hart brothers, whose sister and mother were murdered by their father. As they say in an article in Stylist, at the launch of the ‘Level Up’ campaign:

“The men that kill aren’t anomalous monsters, it happens far too frequently for that to be the case,” the Hart brothers say. “Gender violence is a common pattern in our society, with one in four women experiencing domestic abuse in their lifetime.

“Every time the media fails to call out domestic homicide for what it is, a societal pattern of misogynistic masculinity, and not an isolated domestic incident, it remains complicit in those murders.”

It’s important to raise awareness of the issue of violence against women because this behaviour is unacceptable – and yet we continue to accept it, with headlines that blame victims rather than laying the blame at the feet of the perpetrator.

The Level Up campaign aims to do what agreements on reporting suicide have done previously – recognise the media’s impact on behaviour and its normalisation of acts we want to avoid, and change accordingly. As Crockett writes in Stylist “The hope is that having clear guidelines on how outlets should report domestic violence deaths – similar to the Samaritans guidelines on how to report stories about suicide, which are adhered to by many publications including Stylist – will reduce the chances of families of victims having their grief and trauma “compounded by irresponsible reporting”.”

By breaking down – as I’ve done over the last three weeks – steps we follow to get to this horrendous result it should be clear to all readers that the progression from violent words to violent actions can be halted. As the Hart brothers can testify there are so many signs in the run-up to murder that can be used to avoid this ultimate and final end.

Further, another important reason for raising awareness of this issue is that combatting it just isn’t a priority for those in power. For example, one of the many, many grave consequences of our current Brexit focus is that the Domestic Violence Bill will be pushed out of debate – and who can be sure that the current Prime Minister, with his history of sexist remarks (and behaviour) will make a priority of a ‘woman’s issue’?

As MP Jess Phillips has written of the legislation “The domestic abuse bill is a bold piece of legislation; it recognises coercion and economic abuse properly for the first time. It takes us a step forward.” Currently “perpetrators of domestic and sexual abuse being able to cross-examine their victims in the family courts” and that’s one of the many problems with our current law that this legislation seeks to address. ***

Once more such a serious issue will be de-prioritised as ‘women’s issues’ so often are. It’s important for us to make our voices heard and tell those in power that we all deserve better than the status quo. If we can take violence against women for the serious threat it represents then no more women will be murdered by their former or current partners just because it’s an inconvenient issue for us to face up to.

Read up on Level Up and donate money to the cause to help them distribute their recommendations to newsrooms around the nation. There are six points they think will help improve the reporting on men murdering women:

——-
Accountability. Place responsibility on the killer. This means avoiding speculative “reasons” or “triggers”, or describing the murder as an uncharacteristic event. Fatal domestic abuse is usually underpinned by a longstanding sense of ownership, coercive control and possessive behaviours: they are not a random event.

Accuracy. Name the crime as domestic violence. Rather than describing the death as a “tragedy” or “horror”, frame it within the context of a pattern of controlling behaviour, coercive control and/or previous assaults. Include a reference to helplines at the end of the article, so readers know where to seek help.

Images. Centre the image of the deceased woman, but include a picture of the perpetrator at the bottom. If she is a Muslim woman, use the image that has been provided by the family and police alone.

Dignity. Avoid sensationalising language, invasive or graphic details that compromise the dignity of the dead woman or her surviving family members. In cases of BME women, focus on the perpetrator’s gender-based abuse and control as the root cause of homicide. When religion or culture is used as a reason, it detracts from the sexist values the killer holds that underpin their violent actions.

Equality. Avoid insensitive or trivialising language or images. All women have a right to dignity and respect, especially in death, regardless of their race, sexuality, occupation, class and whether they live with mental or physical disabilities. Remember a victim’s children are likely to read reports on their mother’s death.

Sensitivity to cultures and religion. When reporting on a woman’s death, there is no need to discuss religious or cultural values, or her religious or cultural background unless imperative to a case. Be careful not to perpetuate stereotypes or make assumptions, particularly around ‘honour killing’ or domestic homicide.

Call out contributory behaviour online and with your friends and family. When you see articles that skew the situation and continue to push the line that men have been provoked into violence or that the victim is to blame in some way make sure that people know that’s not good enough. Reporting needs to change.

What’s quite incredible is how so many articles frame domestic homicide as an event that came out of the blue, when actually there is a history of controlling behaviour.

Janey Starling, campaign manager for Level Up, as quoted by Moya Crockett in Stylist Why the media must change how it speaks about women killed by their partners

Look through the sources in this piece and look back through this entire month on VIOLENCE. Realise that this behaviour works on a sliding scale where you’re either part of the problem or you’re part of the solution – if you’re laughing off violence against women, ignoring bad behaviour in friends and family or leaving bad reporting unchallenged then you’re contributing to an environment in which we’re all comfortable with 76% of murders being committed by someone known to the woman victim.

Read the Femicide Census to learn more of the stories of the 139 women murdered by men in 2017 and the fact that 40% of them were victims of ‘overkilling’, a new term developed to describe the ways in which, as Perraudin writes in the Guardian “the force or method used was greater than that required to kill the victim. In one case, a victim was stabbed 175 times, while in others women were “hit 40 times with an axe”, “bludgeoned repeatedly” and “battered virtually beyond all recognition.” Make no mistake: the murder of women by partners and former partners is all about re-asserting control and comes at the end of a drawn out and consistent pattern of abuse that we take as normal and do little to prevent.

Write to your MP to encourage them to bring the Domestic Violence Bill up the list of priorities. I’ve written throughout the past seven months that each of us is capable of activism in our own way – we just need to find a topic we feel strongly enough about. If this is yours, you can make change happen, as Gina Martin’s fight goes to prove. There’s solidarity and community in this fight and I’d encourage you to make your voice count. Just 20,427 people cared enough to sign a petition to make the Level Up guidance happen – shouldn’t so many, many more people care about this issue than that?

If you’re struggling to imagine what improvements could look like, or even to believe that we could possibly move the dial on this then I’d like to repeat what I wrote in Week 25:

If you need inspiration on how solutions can be found, have a read of this piece in the Guardian What would a city that is safe for women look like? because at the heart of the solutions to issues such as the prevalence of sexual harassment of women is firstly recognising that the issue exists, and secondly framing the issue in a way that considers how we would behave if we didn’t assume that the behaviour was normal and therefore insurmountable. Just a few of the methods that have improved women’s lives dramatically have been: the launch of SafetiPin which has seen 90% of the lighting deficit in Delhi fixed; the the redevelopment of Plaça de la Llibertat near Barcelona which saw women actually consulted on their needs ahead of work; and the work of No Means No in Nairobi, where three-quarters of boys trained by the organisation have successfully intervened in a violent or sexual assault on a woman.

Finally, I’m going to repeat my tips from the last three weeks:

Yours in sisterhood, Susi

** Frances Perraudin in the Guardian Femicide in UK: 76% of women killed by men in 2017 knew their killer 18 December

*** Jess Phillips MP in Politics Home Jess Phillips: The Domestic Abuse Bill takes us a step forward. But there is much further to go 26 January 2019

Sofia Tindall in Grazia Jess Phillips: ‘Every Woman I Know Has Suffered Violence, Myself Included’ 9 April 2019