posted in Feminist Fact Friday on 6 September 2019 by Susi 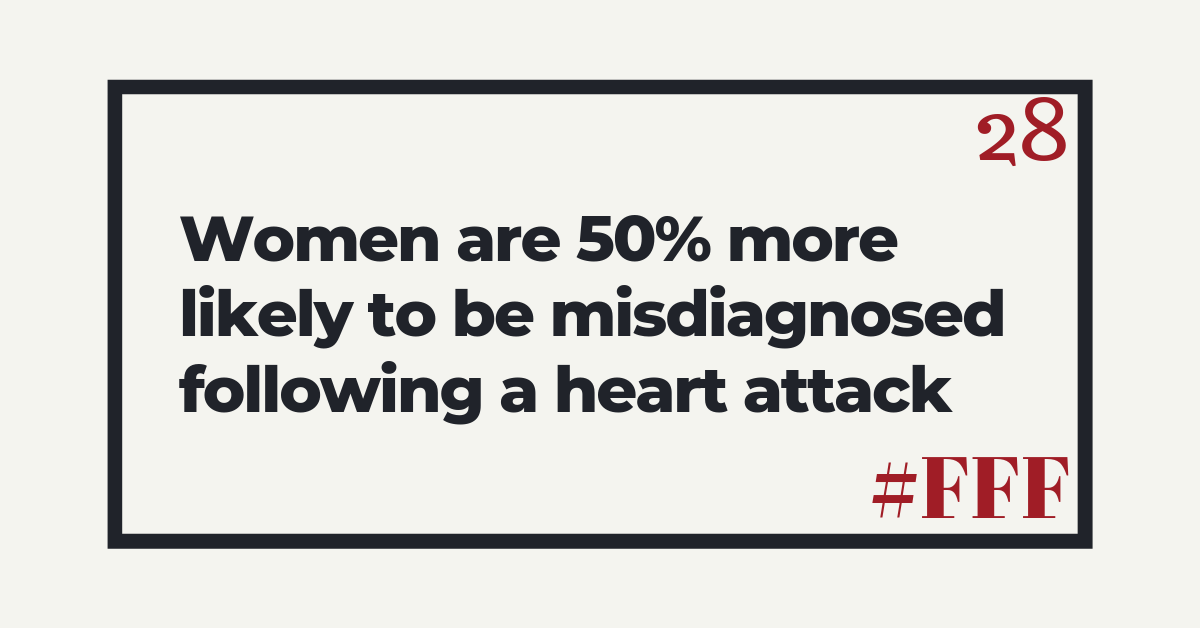 This month I’m focusing on HEALTH, as the nights draw in and the cold returns. As I wrote in my introduction, the reason for this focus is that medical practice is taught on the basis of the male body being the default and the female body being simply a derivative of the former. And this has grave consequences.

Throughout her book Invisible Women: Exposing Data Bias in a World Designed for Men Criado-Perez lays out multiple examples of male bodies being examined and tested in research (with no women included), drugs not working at all on women’s bodies – or in fact having adverse effects on them – or women’s experiences simply being disbelieved.

A study found that women are less likely than men to get CPR from a bystander, and are more likely to die. The research, funded by the American Heart Association and the National Institutes of Health, found that only 39% of women who have a cardiac arrest in a public place were given CPR, versus 45% of men. Men were 23% more likely to survive.

Fay Schopen in the Guardian The healthcare gender bias: do men get better medical treatment? 20 November 2017

If I need to sum up for you why it’s an issue that women are avoidably misdiagnosed following a heart attack then you might be reading the wrong article. In fact, it might be best to just face up to the fact that Feminist Fact Friday isn’t right for you.

Let’s behave for a moment as if this question should be taken seriously; had medical practice and scientific research spent even a fraction more time or money looking at the differences in women’s bodies to men’s then we might be able to believe that combatting heart disease and coronary issues in women was a near impossible task. Or at least that there was a good reason between the vast difference in outcomes. However, as Criado-Perez writes ‘Most early research into cardiovascular disease was conducted on men, and women continue to be under-represented, making up only 25% of participants across thirty-one landmark trials for congestive heart failure between 1987 and 2012.’

We continue to labour under the illusion that heart attacks in women present in the same way as in men. That’s simply not true (as you can learn from the links below) but the myth continues, as we focus on men’s health and bodies as the default and ignore the ways in which women differ.

So, quite simply: it’s important to raise awareness of this fact because women are dying.

Women were more likely to be inadequately treated by healthcare providers

As Schopen writes in the Guardian: ‘gender bias in healthcare is an epidemic that needs to be addressed: “People are dying because they are female and doctors are blinded by their gender,” Buckley says. “Don’t assume that women are hysterical. That’s quite basic. Treat everyone as a person.”’

So, the very first takeaway from this is to take women’s experiences and symptoms seriously. We’re all so accustomed to thinking that period pain, for example, is totally natural and just needs to be accepted – what about if serious research and investment were made into the problem so that women didn’t find themselves crippled monthly by this pain? We shouldn’t be so complacent.

Next, do your research: check out the advice from the American Heart Association and British Heart Foundation to find out more about how women’s symptoms differ from men’s.

Finally, I’m clearly not the only one struggling with this topic:

This is a big, unwieldy issue is a discussion that is perhaps too amorphous for some. Health charities the King’s Fund, the Nuffield Trust and the Health Foundation, along with the Royal College of Obstetricians and Gynaecologists, were all approached for comment for this article but failed to provide anyone to talk to.

Schopen in the Guardian The healthcare gender bias: do men get better medical treatment?

As readers will have got used to across the past seven themes I usually offer suggestions on what we can do to confront inequality. I have to confess that on this one the two points above are all I have this time (as well as my usual spiel urging you to buy a copy of the excellent Invisible Women. I’d love to hear from you what you think can be done.

** Fay Schopen in the Guardian The healthcare gender bias: do men get better medical treatment? 20 November 2017