posted in Feminist Fact Friday on 15 February 2019 by Susi 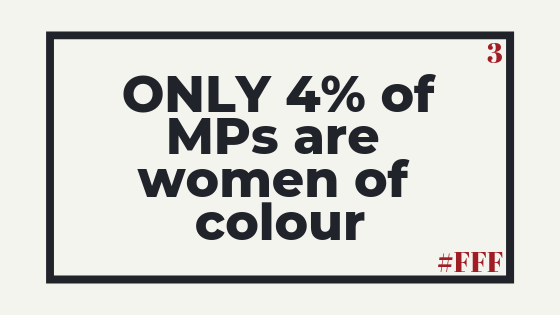 No country can ever truly flourish if it stifles the potential of its women and deprives itself of the contributions of half its citizens.

Michelle Obama, lawyer, speaking at the Summit of the Mandela Washington Fellowship for Young African Leaders 2014

The BBC called the 2017 election the ‘most diverse Parliament yet’. Given how woeful the numbers had been previously they were disappointingly correct.

“Politicians do not represent me. I’m black, working class, young and a woman. I rarely see my identity reflected in those running as parliamentary candidates. The issues that affect black and minority ethnic (BME) women in particular are rarely discussed except as a vote winning scheme”.

Fatin, 17, interviewed in the New Statesman Where are the ethnic minority women in politics?’ 29 April 2015

As of the 2017 election there are 52 MPs from ethnic minority backgrounds in Parliament. 26 of those are women.

That’s so few that it takes up no space at all to list all of the names of the 19 Labour MPs, 6 Conservative MPs and 1 Lib Dem MP here:

I think it’s important to write the names of every single woman here because it’s a huge achievement for them to be representing us in Parliament. As Director of Operation Black Vote, Simon Woolley was quoted as saying on the election: “More talented BME faces will help transform Parliament and inspire many more to believe that we all have a voice and a place in our society.”

While I was planning and writing this week’s article I came across a moving and very topical tweet from MAKERSwomen :

In 2018, Arlan Hamilton became one of the first black women ever to be featured on the cover of @FastCompany. “All I could think of was me, years ago, looking for her: a black woman on a business magazine who isn’t a celebrity turned herself into something.” @arlanwashere pic.twitter.com/3RWyFWxF4R

I’d like to quote Arlan Hamilton, founder and CEO of Backstage Capital (which, by the way has a great purpose, check it out) in full from the video above to drive home how important representation is:

When I found out I was going to be on the cover of Fast Company, I just started crying. All I could think of was, like, me, years ago, looking for her– a black woman on a business magazine who isn’t a celebrity, who turned herself into something. People who are not often represented– they don’t feel heard. They don’t feel seen. It has nothing to do, really, with me. It’s about what it represents. It’s our cover.

According to the 2011 census 13.6% of the UK population are Black, Asian, Mixed or Other ethnic group. With 26 BAME women in Parliament we’re not close to representing the make-up of our diverse nation – with 52 BAME MPs we’re only at 8% of the 650 total. Representation matters.

Most of us are confused about racism and race, and as celebrated author Reni Eddo-Lodge so eloquently put it on Woman’s Hour in 2017:

I think that when you try to talk about racism, first there’s an understanding of it that isn’t accurate: good people and bad people; we make it about morals. But I think that racism is a structural thing, embedded in the institutions and organisations that we expect to treat us all equally.

So needing to see better representation in Parliament is about recognising the ways that women of colour have been deliberately kept out of systems of power for centuries. We’re all a part of this structural racism and need to work hard to dismantle it. As well-known anti-racist and feminist scholar Peggy McIntosh put it in 1989:

I was taught to see racism only in individual acts of meanness, not in invisible systems conferring dominance on my group.

Read Black and British: A Forgotten History to understand the gaps in your knowledge and fully appreciate how whitewashed history teaching has been in the UK.

Read Why I’m No Longer Talking to White People About Race by Reni Eddo-Lodge to understand why much of what you think in this area is probably wrong.

Read up on ‘privilege‘, starting with the woman who invented the term, Peggy McIntosh, and then look at a term coined by Kimberlé Crenshaw ‘intersectionality‘ – feminism should be about so much more than the straight, white, cis-gendered, middle-class women who have historically represented it.

Celebrate the achievements of women of colour in the public eye (and in the world around you too, of course!) starting with (and absolutely not limited to) some of these amazing women: Phillis Wheatley, Mary Seacole, Fanny Eaton, Evelyn Dove, Lilian Bader, Joan Armatrading, Olive Morris, Margaret Busby, (the aforementioned) Diane Abbott, Malorie Blackman (one of my biggest heroes), Dr Shirley Thompson, Zadie Smith who you can find in this article from the BBC. Recognising the success and leadership of black women and women of colour is key to increasing representation and removing barriers to other women following in their footsteps.

One source I’ve found particularly rich and inspiring is the Instagram account for the Mixed Company team who recently partnered with the Advertising Club of New York to “pay homage to the Black “Icons, Rock Stars, & Innovators”of the Golden Age and today!”

Nothing says we ain’t new to this like #BlackHistoryMonth . Today we’re 🙌🏿🙌🏾🙌🏽 Barbara Gardner-Proctor. #OG #BlackGirlMagic B.G.P. served as copy supervisor at North Advertising Agency before deciding to launch her own business after she was fired for refusing to work on an ad campaign to which she objected. The ad, which she found demeaning to women and African Americans, parodied the civil rights movement and featured protesting women running down the street and demanding that their hairdressers foam their hair. “It is not, in any way, easy to be a minority company, and as I am a woman and black, it has been a double minority situation.” She named her firm Proctor & Gardner Advertising, the second largest African American owned ad agency at the time, to give the impression of a white male behind the curtains. (A resemblance to Procter & Gamble didn’t hurt.) It would take seven more years after founding her agency before a black female became a major ad agency vice president. Catch more #BHM gems and icons on our site with the @adclubny . 🔗 in bio

As with my previous posts in this politics section, I’d also encourage you to always, always, always vote, to join the Women’s Equality Party and to encourage amazing women you know to enter politics, even if it’s starting on a small, local level.

Week 1 – only 24% of parliamentarians are women

BBC Newsround Election results 2017: The most diverse Parliament yet 11 June 2017

BBC Black History Month in Britain: Great women you should know about 1 October 2018