posted in Feminist Fact Friday on 20 September 2019 by Susi 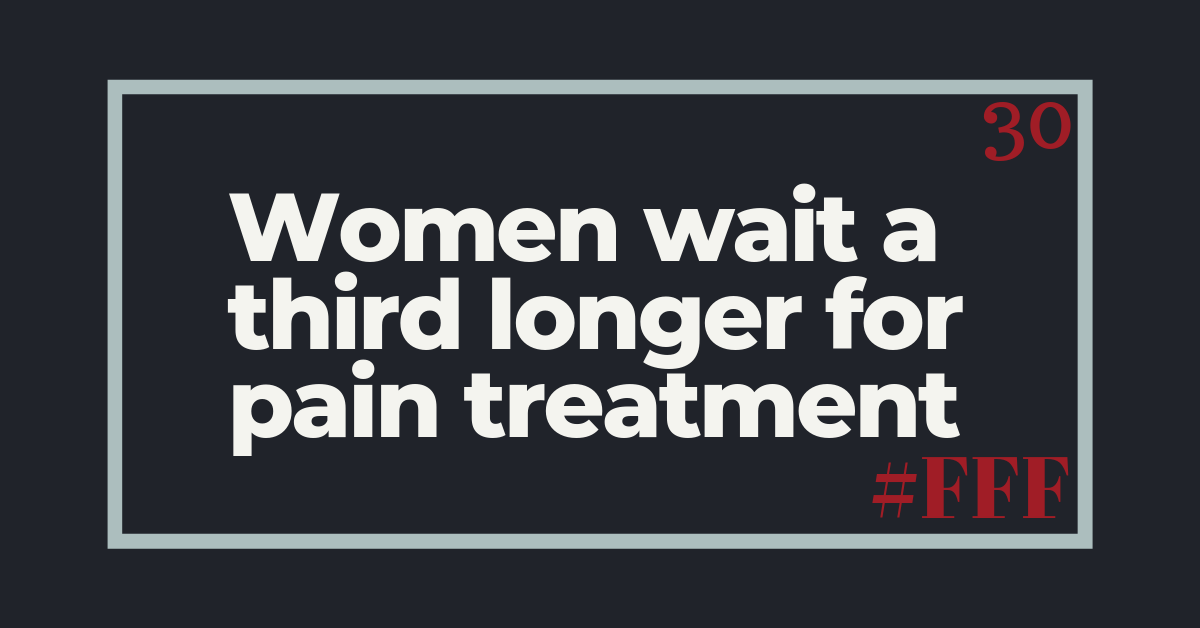 This month for Feminist Fact Friday I’m focusing on the topic of HEALTH and how being a woman generally means receiving a lower standard of care in every way imaginable. From taking longer to receive a diagnosis, through to male symptoms being considered the default, there are grave consequences to being a woman seeking help.

This week I’m following up on a theme that came out in both of the previous posts on this theme: that women’s pain goes under-appreciated and unrecognised.

In the first post on this theme (‘Women are 50% more likely to be misdiagnosed following a heart attack‘) I quoted a landmark piece of research by University of Maryland academics Diane Hoffman and Anita Tarzian called The Girl Who Cried Pain where they wrote that their findings showed “women were more likely to be inadequately treated by healthcare providers.”

As you read stories of the ways in which women’s pain is dismissed and diminished you realise just how muted the quote above really is. Here are two examples that I’d urge you to read in full:

I felt certain of this: The diagnosis of kidney stones—repeated by the nurses and confirmed by the attending physician’s prescribed course of treatment—was a denial of the specifically female nature of Rachel’s pain. A more careful examiner would have seen the need for gynecological evaluation; later, doctors told us that Rachel’s swollen ovary was likely palpable through the surface of her skin. But this particular ER, like many in the United States, had no attending OB-GYN. And every nurse’s shrug seemed to say, “Women cry—what can you do?”

In May 2018 in France, a 22-year old woman called emergency services saying her abdominal pain was so acute she felt she was “going to die.” “You’ll definitely die one day, like everyone else,” the operator replied. When the woman was taken to hospital after a five-hour wait, she had a stroke and died of multiple organ failure.

Dr Imogen Shaw, a GP specialising in women’s healthcare: “I wouldn’t say [period pain] has been hugely investigated,” and when asked if the issue would be taken more seriously if men experienced it, said: “I suspect there would be, being very cynical.”

Siobhan Fenton Period pain is officially as bad as a heart attack – so why have doctors ignored it? The answer is simple

It’s only in researching this article that I discovered that ‘doctors finally confirm period pain can be as painful as a heart attack’. I don’t know about you, but for a fact that’s already been out in the public domain for 18 months it seems to have gone very much unnoticed.

Men wait an average of 49 minutes before being treated for abdominal pain. For women, the wait is 65 minutes for the same symptoms. It’s thought that this is because women are seen as exaggerating pain and being ‘dramatic’ due to sexist stereotypes, while men are listened to and believed when they express the same pain and symptoms.

Siobhan Fenton Period pain is officially as bad as a heart attack – so why have doctors ignored it? The answer is simple

Perhaps you’re thinking that waiting just 16 minutes more isn’t that bad. I’d ask you to read real-life accounts in the sources of this article to understand just how bad every second can be when you’re suffering entirely preventable pain.

What needs to be recognised here is that this isn’t an issue particular to menstruation and abdominal pain, but rather applicable to women’s health care as a whole. As SHEmazing write in their article on women’s pain ‘according to PubMed, there are currently over 2,000 trials focusing on erectile dysfunction, and a grand total of 300 on EVERY TYPE of female pain.’ No wonder it takes 7.5 years to receive a diagnosis for endometriosis! Further, according to the Harvard Health Blog on ‘the issue of chronic pain, 70% of the people it impacts are women. And yet, 80% of pain studies are conducted on male mice or human men.’ Reams of research has proven just how different men’s and women’s physiology is and yet there continues to be a policy of pretending that’s not the case.

Hoffmann, Tarzian The Girl Who Cried Pain: A Bias Against Women
in the Treatment of Pain

As with every post this month, my first piece of advice is to take women seriously. If you were as surprised as I was at the heart attack comparison then that’s one place to start. I had no idea myself that the pain was so severe – why are we so quick to ignore or laugh at or dismiss the pain? Listen to women, believe them, do something to help them.

In a few of the examples offered women are only taken seriously once a man gets involved. It shouldn’t be that way but if you’re a man reading this then please volunteer yourself to help a friend or family member by going with them and demanding better care. As I said: this shouldn’t be necessary, but it’s at least an action you can take as an individual.

Tell everyone you know about facts like this. Pass the message along, help someone to learn something new that they’ve never heard before.

As with every post, I also have a core number of suggestions that I believe will help move the dial for all of us. These include:

On the subject of the Women’s Equality Party, they’re the first political party in Britain to be led by a woman of colour. Her name is Mandu Reid and she’s a fantastic example of how we can all make change happen. Membership starts at as little as £4.40 a month.

Finally, never underestimate the power of making your voice heard. Your MP is there to serve you and every person in their constituency. If the seriousness of these issues has got to you then you can write to your MP and get this on their agenda via the Write To Them site.

Jennifer Billock for the BBC Pain bias: the health inequality rarely discussed 22 May 2018

Laura Kiesel in the Harvard Health Blog Women and pain: Disparities in experience and treatment 9 October 2017

Fay Schopen in the Guardian The healthcare gender bias: do men get better medical treatment? 20 November 2017

Siobhan Fenton in the Independent Period pain is officially as bad as a heart attack – so why have doctors ignored it? The answer is simple 19 February 2016