posted in Feminist Fact Friday on 27 September 2019 by Susi 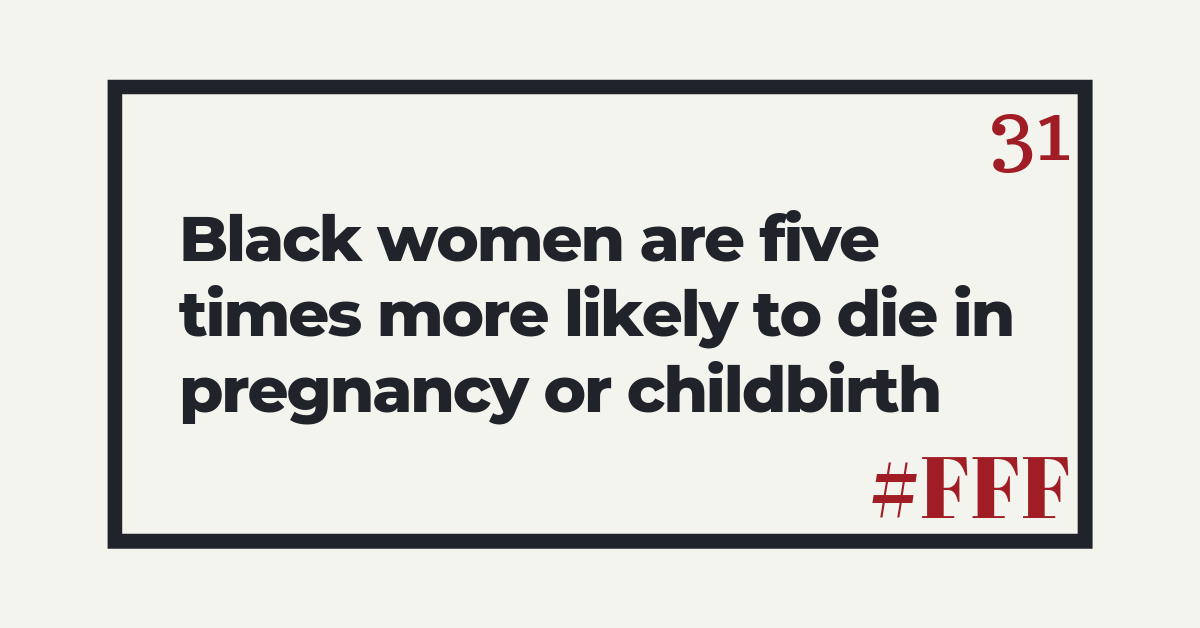 This is the fourth and final topic in my focus on HEALTH, having previously examined how women are 50% more likely to be misdiagnosed following a heart attack, that it takes an average 7.5 years for women to be diagnosed with endometriosis and that women wait a third longer for pain treatment. This week I’m narrowing my focus with a particular look at the poor outcomes for black mothers, as I want to keep intersectionality a constant drum beat at the heart of Feminist Fact Friday.

Though I’ve often failed to deliver statistics that take disparate experiences across race and ethnicity into account, when the facts have been there I’ve made it a priority to include them. Take a look back at how unfairly burdened women of colour are with office ‘house work’ or how black women are FORTY PER CENT less likely to be promoted than white men.

Covering the US landscape, this ProPublica outline is a compelling piece on the subject of mortality amongst black mothers, where the outcomes for African American women across a whole range of measures are incredibly poor, to say the least:

There are plenty of facts to focus on when talking about childbirth but I’ve chosen this one as a reminder that no matter how hard and unequal life might be for women – it’s even harder and less equal for black women.

This week when picking up her Emmy (best lead actress in a limited series or television movie for Fosse/Verdon), Michelle Williams used her speech as an opportunity to focus on the adverse outcomes for people of colour. And that needs to be a priority for anyone with a platform – the way this blog is for me.

What’s far better than raising awareness through your own platform is giving up your space for people who can articulate the first person experience so much better; before I continue on with this week’s topic I’d like to give one of my semi-regular shout-outs to Black and British: A Forgotten History by David Olusoga and Why I’m No Longer Talking to White People About Race by Reni Eddo-Lodge. Excellent books and absolute must-reads.

For so long, black women in the UK have had to lean on the statistics of the US to help validate their own stories of pregnancy and childbirth. Black women now have the data to sit alongside what we already knew.

Candice Braithwaite in Why are black mothers at more risk of dying?

As Emma Kasprzak for the BBC writes “High profile black women such as Serena Williams and Beyoncé have highlighted the difficulties experienced by black women during pregnancy and childbirth.” and as research out of the US shows (and Serena and Beyoncé’s ordeals further prove) this really isn’t an issue tied to economic inequality. * It’s about women’s health not being a priority and about black women’s health in particular coming at the very bottom of the list of priorities. Black mothers being five times more likely to die of complications in pregnancy and childbirth sits at the intersection of sexism and racism.

Why do we accept such poor outcomes for women and turn a blind eye to the even worse situation black women face?

The evidence that women are being let down by the medical establishment is overwhelming. The bodies symptoms and diseases that affect half the world’s population are being dismissed, disbelieved and ignored. And it’s all a result of the data gap combined with the still prevalent belief, in the face of all the evidence that we do have, that men are the default humans. They are not. They are, to state the obvious, just men. And data collected on them does not, cannot, and should not, apply to women. We need a revolution in the research and the practice of medicine, and we need it yesterday. We need to train doctors to listen to women, and to recognise their inability to diagnose a woman may not be because she is lying or being hysterical: the problem may be the gender data gaps in their knowledge. It’s time to stop dismissing women, and start saving them.

This week’s fact is an important one to highlight because it’s so incredibly avoidable – if only the will were there.

Defendants of the status quo or those of us who like to believe the best of people might argue in a situation like this that, when faced with damning evidence that women – and particularly black women – are being discriminated against with dire consequences, it’s because the answers are too difficult, too complicated, too expensive. My first argument against that would be ‘has anyone tried?’ Because most of the time there is an abject failure to even recognise the problem for what it is. However, there are times, such as an example that Criado-Perez covers in Chapter 11 of Invisible Women, that prove the cure can often be incredibly simple and yet the political and systemic will to change the situation is completely lacking.

In 2016 Susan Wray and her research partner Eva Wiberg-Itzel found that just by giving mothers a small dose of bicarbonate of soda before administering oxytocin, the common treatment for weak contractions (the cause of over half of deaths in childbirth) made a dramatic difference in vaginal birth: 67% of women who received oxytocin gave birth vaginally, but this rose to an incredible 84% if they received bicarbonate of soda first. What a phenomenal, easy and accessible treatment to have found. And yet, when Wray applied to the British Medical Council for funding to investigate this treatment further she was turned down as her research was ‘not a high enough priority’. **

Black women shouldn’t be facing such adverse circumstances and should not expect a worse outcome than anyone else needing care – the fact that this is so preventable makes the situation even worse.

Start questioning what you see. When you see statistics that demonstrate worse outcomes for women, ask yourself – and more importantly: ask the experts – why there are no figures that cover race or sexuality. Ask out loud and demand better of publishers, researchers, journalists.

Educate yourself. Start with the sources in this piece, work back through the rest of Feminist Fact Friday and even more importantly buy copies of Black and British: A Forgotten History and Why I’m No Longer Talking to White People About Race. It’s people like Olusoga and Eddo-Lodge who should be telling these stories.

Watch out for Malorie Blackman’s Noughts & Crosses, which is coming to television screens this autumn. I can promise you that it will be life-changing, just as her incredible book series is. If you need a perspective shift and a look at just how entrenched your world view is, this is it. Watch it, read it, then do better.

Look up the Women’s Equality Party. It’s the first political party in Britain to be led by a woman of colour. Her name is Mandu Reid and she’s a fantastic example of how we can all make change happen. Membership of the party starts at as little as £4.40 a month but you can find them on every social channel if you just want to get an initial idea of what they’re campaigning for.

Never underestimate the power of making your voice heard. Your MP is there to serve you and every person in their constituency. Let them know that you care about women’s health outcomes and that you think something should be done about the fact that black women are five times more likely to die in pregnancy or childbirth. Get this on their agenda via the Write To Them site.

Emma Kasprzak on the BBC Why are black mothers at more risk of dying? 12 April 2019