posted in Feminist Fact Friday on 4 October 2019 by Susi 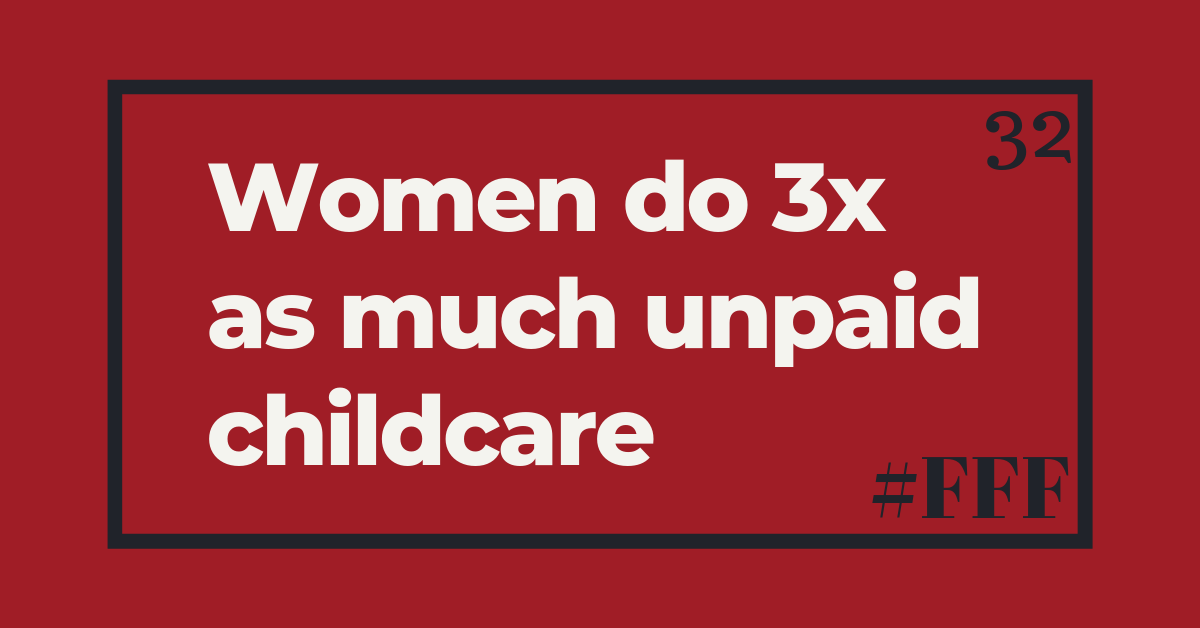 What is Feminist Fact Friday? Needing a quick refresher? Read up on what this is all about in my Introduction to #FFF and view the rest of the articles in the category here.

Strong gender stereotypes persist in British society and continue to hold women back.

Equality and Human Rights Commission Is Britain Fairer? — The state of equality and human rights 2018

This month #FeministFactFriday will be all about the EARLY YEARS and the forces that shape our world to the point where sexism becomes an invisible backdrop to our lives.

I’m kicking things off with a statistic that harks all the way back to the third theme in this series – MONEY – and makes clear that so many of women’s adverse experiences are down to society holding women solely responsible for childcare, and penalising them rather than accommodating them for the sacrifices they have to make.

As Fidelity’s The Financial Power of Women report made clear: “We take breaks from our career for all the right reasons, and then face severe setbacks to our financial power when we return in terms of career progression, earning potential, retirement savings and investable income.”

Not only do women spend 3x as long on unpaid childcare as men, this also sets them back substantially in earnings and ultimately pension savings too, as their wealth never recovers Research from think tank the Social Market Foundation highlighted working mothers earn 20% less than fathers ten years after the birth of their last child.*

If there are two parents involved then it should be the responsibility of both parents to take care of the child. There is very little when it comes to childcare that can only be done by the mother and yet the burden still falls very much on her shoulders. This is important because of the impact it has on the mother and the impact it has on the child.

Limiting women’s development in the workplace removes a woman’s choice about where she wants to spend her time – because most offices are still geared towards presenteeism and certain expectations of over-delivering, as well as entertaining that comes at unsociable hours. In fact, in the US, 70% of men in the top 1% of earnings have a spouse who stays at home and the expectation continues to be that it’s the woman in a relationship who needs to sacrifice her career. It doesn’t matter how promising a woman’s career might be, nor how much she would like to continue working, the entire system is engineered to hold her back and stop her from having a choice. **

As a UK resident, should she decide to return to work and need childcare she and her partner are faced with some of the most prohibitive costs across all of Europe. As the Fidelity report states “the average price of 25 hours of care a week for a child under two in a nursery is £6,300 per year, a 7% rise since 2017.” ***

The impact it has on children is that we end up role modelling very early on that an imbalance in responsibilities and time spent – with the majority of care and the home falling within a woman’s remit – is the natural way of things. I don’t doubt that there are some people who prefer to have the main part of these duties fall to them, however the point here is that we operate in a system that removes the choice from both men and women, ensuring that this cycle repeats without end.

Men and women had roughly the same leisure time in 1961 (4 hours and 50 minutes) but now men have somehow managed to eke out 45 minutes more a day, whilst women’s leisure time went up by just five minutes.

Damian Whitworth in The Times We work more and sleep less than 50 years ago? Wrong 20 June 2019

Why is that men’s additional leisure time has grown to almost 10 times what women have gained?

By the age of two, most children are aware of gender, and from there they build out all kinds of understandings and stereotypes around what it means to be a boy or a girl, a man or a woman. ^ There is no industry in the UK where women earn more than men, women continue to be under-represented (with just six women FTSE 100 CEOs) ^^ We are teaching children and young people to expect that women do more unpaid work and that’s just the way it should be.

Our society teaches children expectations and rules about gender that restrict their opportunities and cause real harm. Those rules damage the self-esteem and wellbeing of each generation, and they lie behind the gender pay gap, the harm caused to men by toxic masculinity, and violence against women and girls. Many teachers and parents feel helpless to change this picture.

I’ll be building on this in the coming weeks, going through more evidence on how limiting these examples can be for children and adults.

Start by reading Darcy Lockman’s article in the New York Times What ‘Good’ Dads Get Away With to understand how complicit you might be yourself – as she puts it ‘Division of labor in the home is one of the most important equity issues of our time. Yet at this rate it will be another 75 years before men do half the work’. Are you pulling your weight in whatever your own situation is? Perhaps there’s even someone you might want to share the article with…

Have a read of the NUT’s work in early years education (Breaking the Mould: challenging gender stereotypes) for many of the interventions they’ve looked at and all of the ways in which parents can change things.

Vote with your feet! If you’re in a position to do so, petition your employer for better, more supportive childcare policies, even if you’re not in a position to need them yourself – you might one day, but even if you don’t, you’ll be helping others. And if they’re not interested in moving into the 21st century, then find an employer that takes this seriously. If you’re a decision-maker yourself, then start innovating because this matters, and make sure you take as much parental leave as you can.

Read up on how men are often denied a change in working hours – making it harder for them to co-parent effectively, and proving how bad inequality is for both genders – and also have a look at how imbalances in the home are reflected in the office, with the ‘office house work’ women are expected to do.

Finally, there are my regular suggestions: join the WEP and the Fawcett Society to continue the fight for equality.

* Fidelity The Financial Power of Women 2018

Social Market Foundation Back on Track: Making the most of parents’ working lives 2018

Centre for Time Use Research