posted in Feminist Fact Friday on 25 October 2019 by Susi 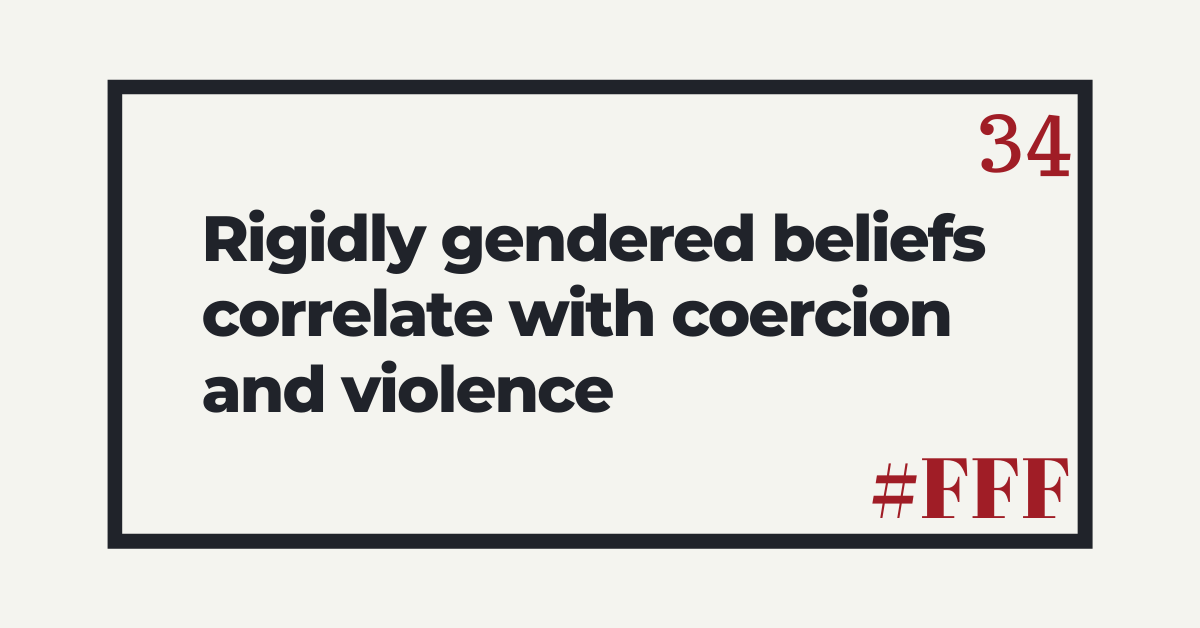 Our society teaches children expectations and rules about gender that restrict their opportunities and cause real harm. Those rules damage the self-esteem and wellbeing of each generation, and they lie behind the gender pay gap, the harm caused to men by toxic masculinity, and violence against women and girls.

This is the final week on EARLY YEARS, a topic where we’ve already covered how early stereotypes start limiting children’s career aspirations (holding boys back from becoming nurses, and girls from becoming mechanics) and that unpaid childcare largely falls to women.

If you read the Fawcett Society’s Gender Stereotypes in Early Childhood literature review you’ll soon come to see how early years sexism is stifling for boys and girls in myriad ways. A sprinkling of depressing examples includes:

In fact, I’d follow that up with a reference to recent research from the University of Copenhagen demonstrating staggering sexism in the way that men and women are described across 11 billion words in 3.5 million books.

Their analysis demonstrates that negative verbs associated with body and appearance appear five times as often for female figures as male ones. The analysis also demonstrates that positive and neutral adjectives relating to the body and appearance occur approximately twice as often in descriptions of female figures, while male ones are most frequently described using adjectives that refer to their behavior and personal qualities.

WEF This machine read 3.5 million books then told us what it thought about men and women

Without going too deeply into this slight digression, I’d like to remind the reader of how much our world is shaped by our language – language more likely to describe a woman as beautiful, battered and nagging, and a man as rational, prodigious and brutish. Sexism surrounds us like the air we breathe and it shapes our children even while we’re unaware of it doing so.

In the context of this week’s topic, it’s significant to note that a woman might be described as ‘battered’ and a man ‘wounded’, but that it’s the men who are described in ways that suggest they’re the actors and the women the objects: ‘brutish’ and ‘brutal’ being two such examples.

In last week’s post I looked at how children as young as seven already have deeply gendered views on their future career choices. In fact, the further you look into the research – including Gina Rippon’s The Gendered Brain – the more you realise that gendered delineation begins very, very young, but also that so much of it is avoidable and in many cases as a result of nurture rather than nature.

Most people would agree that they don’t want gender to be a barrier for anyone, however they identify. However, we’re lucky when the worst outcome is that we’re prevented from following the exciting career options open to us as I discussed last week. Far worse than that are the outcomes I described in August across four weeks on VIOLENCE. Worse is being scared to live our lives freely in public, being sexually harassed at work, being raped or sexually assaulted without the perpetrator facing any consequences, or being one of the two women a week murdered by a current or former partner.

This behaviour – this violence against women – begins somewhere.

In the Fawcett Society literature review the authors Dr Leah Culhane and Andrew Bazeley cover a number of studies that show strong correlations between boys and men who hold rigid ideas of what gender means, and demonstrate violent or coercive behaviour.

Evidence submitted by writer and researcher Rebecca Asher to the Sexual Harassment and Sexual Violence in Schools inquiry found, drawing on research by Lacasse and Mendelson, that amongst adolescents “the more rigidly gendered the beliefs of male adolescents, the more likely they are to practise sexual coercion.”

In the US, research with adolescents has found that the degree of traditional gender role attitudes held by eighth or ninth graders predicted dating violence over an 18 month period.

That’s not to say that being sexist means you’re violent towards women; rather, it’s a good predictor of your behaviour, and further: to anyone who argues that stereotypes and rigid gender structures are innocent and free of consequence this link from EARLY YEARS development through to the VIOLENCE that mars the lives of women and girls is strong enough that we need to take notice.

In the beginning of this article I offered three examples from the Fawcett Society review that showed how early stereotyping manifests itself and the different forms it takes – from treatment by teachers, to different personality traits associated with boys and girls, through to the consequences for mental health. Each one of these examples is small in isolation but builds over time to form a very strict picture of what it means to be a man and what it means to be a woman. Violence against women and girls is one of the outcomes we can all expect in a world that doesn’t treat discrimination as the true threat it represents.

That stereotyping in EARLY YEARS effectively removes choice from boys and girls should be enough of a reason to object to strict ideas on gender – but for people who don’t consider this serious enough, I hope that the strong correlation between rigid gendered beliefs and violence or coercion is enough to make them think twice about brushing away sexism. Further down the line some of this behaviour becomes the 41,186 instances of rape reported to police in 2017 and the 139 women murdered in the UK that same year.

Call it out when you see it. Start small, but when you witness sexism in action try to say something. Even as little as repeating a comment back to someone is a good way of flagging that it’s not appropriate.

Read the Fawcett Society’s Gender Stereotypes in Early Childhood literature review. It’s an easy (if not particularly pleasant) read and is filled with information across so many areas including education, parenting and retail.

Where you can, question your own behaviour. Do you regularly compliment children and young people in gendered ways? Calling boys smart and girls pretty, for example? Do you give gendered toys or clothing colours as presents? There’s nothing wrong with boys liking blue and girls liking pink… except when it throws you if they like the opposite. These are tiny examples that feel inconsequential, but the more you’re strengthening a rigid idea of gender in the minds of those around you, the more you’re contributing to this problem.

Do you have good role models in your life and do you surround yourself with people who break out of stereotypes? Last week I covered The Female Lead’s Transforming Your Feed which is an excellent place to start building out examples of successful women who are living up to their potential in spite of society’s barriers.

World Economic Forum This machine read 3.5 million books then told us what it thought about men and women 30 September 2019