posted in Feminist Fact Friday on 22 November 2019 by Susi 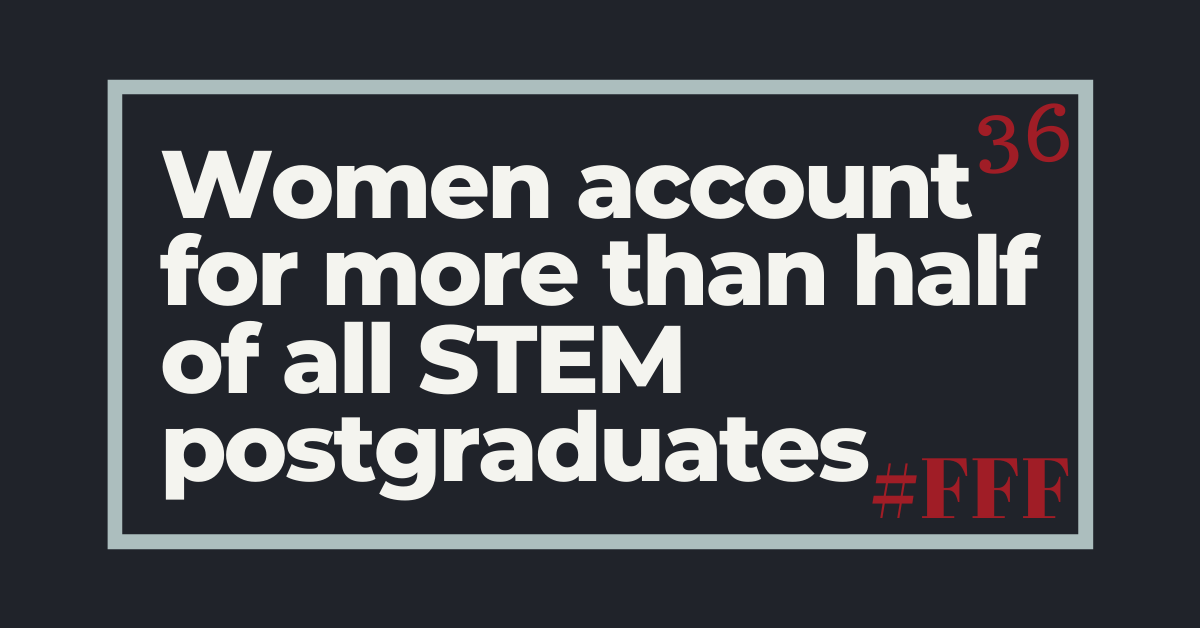 Is this your first time reading Feminist Fact Friday? Read up on what this is all about in my Introduction to #FFF and view the rest of the articles in the category here.

In the introduction to this month’s theme (EDUCATION) I quoted the NEU:

Even in industries and sectors that are women-dominated, men still make up the most senior and highest paid positions. As I’ve written repeatedly on #FeministFactFriday, if systemic sexism and racism weren’t at the heart of the obstacles women and people of colour face, then there would be at least some industries where women were paid more than men just through pure random chance. In fact, there is not a single sector in the UK where women earn more than men on average – and that includes women-dominated professions such as caring and teaching. *

In the last academic year, women accounted for more than half of all STEM (science, technology, engineering and mathematics) postgraduates at UK universities. This fact surprised me, though not as much as last week’s terrible statistic, that there are only 25 Black women professors in the UK. And let’s face it, in many ways this is a wonderful surprise.

I have conversations on a very regular basis with a whole range of people – from the pretty outrightly sexist, through to the well-meaning and progressive – and so often they’ll point to a social pattern or a series of behaviours as evidence that a situation isn’t sexist; girls are just naturally more shy, caring and empathetic; boys just happen to like football more. And blue.

People will point to any number of things that seemingly start young as proof that gendered differences are genetic rather than socialised. But if you hit the literature (books such as Gina Rippon’s The Gendered Brain) you soon realise that these differences aren’t innate, they’re taught, and babies, toddlers and children are very, very quick to pick up on the signals we force on them.

It’s with this in mind and with the topics I covered in last month’s EARLY YEARS that I’m pleased to cover some good news for once. In a world where women are taught to avoid STEM subjects it’s encouraging to see the tide turning at least a little.

Tell everyone. Fight the stereotypes that say that women just aren’t interested in science, technology, engineering and mathematics.

Fight for change. As I said in the introduction, just having women-dominated sectors is no guarantee of having equality in any way. It’s only with serious work that we’ll see this large number of women postgraduates reaching senior positions and achieving gender pay equality.

Go back through previous Feminist Fact Friday articles to arm yourselves with the facts. The pay gap is hard to defeat. Women’s behaviour is perceived far more negatively than men’s. Women are expected to perform mundane tasks at work that have no status and don’t improve their chances of promotion. The list goes on and on and on. Arm yourself, label those issues when you see them in the workplace, be an ally to others. It’s for all of us to chip away at this problem.

* “The data show that the pay gap persists in all 20 sectors of the economy, with none paying women more than men on average.” Aleksandra Wisniewska, Billy Ehrenberg-Shannon, Cale Tilford and Caroline Nevitt in the Financial Times Gender Pay Gap: women still short-changed in the UK 23 April 2019