posted in Feminist Fact Friday on 29 November 2019 by Susi 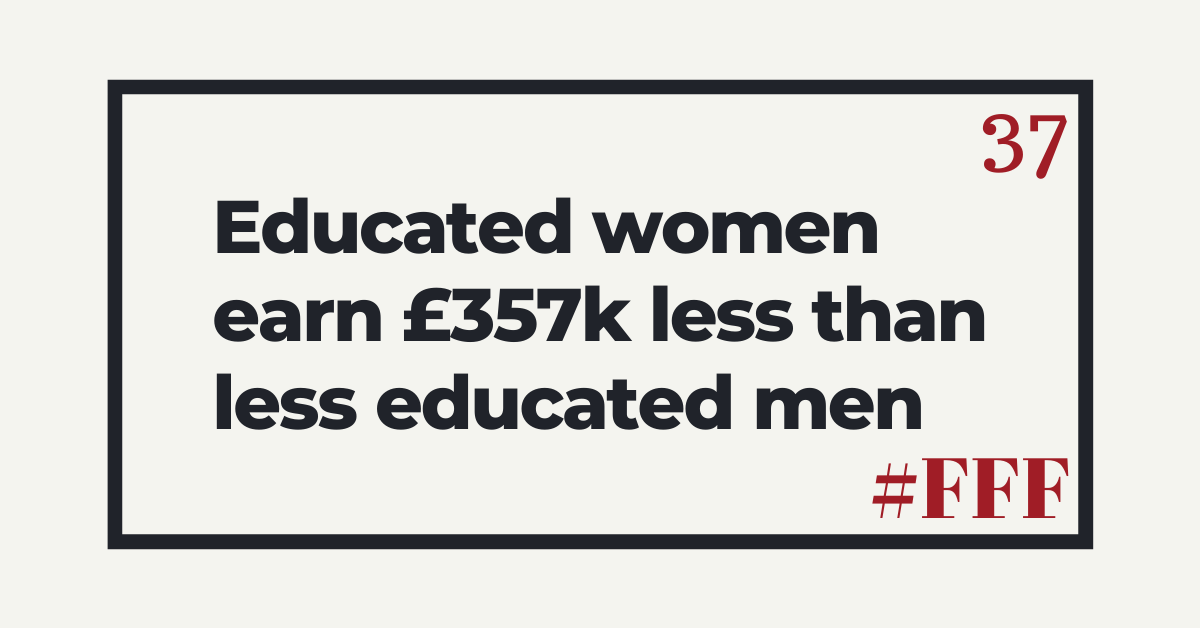 Are you new to Feminist Fact Friday? Read up on what this is all about in my Introduction to #FFF and view the rest of my #FFF articles here.

In the first two weeks’ of posts on EDUCATION I focused on opposite spectrums of news, both the terrible and the great.

In this week’s post I’d like to bring them both together in a way that reminds us all that the fight against inequality is a constant battle. It’s not enough to celebrate more and more women entering STEM – we have to make sure that when they get there, they have the same opportunities as men.

The latest evidence shows that women will earn significantly less over their lifetimes than men:

British women will earn £263,000 less than their male counterparts over their life, according to new data from the Office for National Statistics (ONS).

Even for those women going above and beyond, working hard and proving themselves eminently capable, the gender pay gap prevails. For example, women aged 26-35 with Master’s degrees and PhDs can expect to earn £803,000 in average lifetime earnings, versus men with undergraduate qualifications who will earn £1,160,000.

An example I cite repeatedly in these posts (regular readers may well be sick of it by now) is that of Marc Benioff and the overnight pay rise he gave to eradicate the gender pay gap in his company. Though I usually focus on Benioff’s decisive and innovative leadership (and his willingness to put money behind his principles, which most people in power actively avoid) one thing I have often spent less time on is the way in which the gender pay gap returned repeatedly at Salesforce. Over successive years he had to pay out repeatedly to fight against a pay gap that returned again and again like a nightmare boomerang. By the time he was done he’d paid out $8.5 million in corrections.

Even in a company with a leader who actively and swiftly moves to fight against the gender pay gap, social norms and systemic sexism return time and again. We cannot underestimate how easily discrimination returns, because it’s the default in our society.

This is important to note because while it’s great to celebrate the progress that women have made in STEM it’s no guarantee whatsoever that women will make progress. That’s because we continue to put the onus on women to change rather than recognising that it’s the system that needs to change. Women are leaning in already, but they’re not seeing the results that should come from their effort.

As often as I repeat the Marc Benioff example I will also urge every reader to buy a copy of Invisible Women by Caroline Criado-Perez. I cannot emphasise enough how much sexism is like the air we breathe; it’s everywhere. You can start by seeing it for what it is.

Check out companies like Ellevest, She Wins and Fidelity’s Women and Money and go back through my MONEY chapter to put power back in your own hands.

Todd is that middle manager — really nice guy, everybody likes him. He’s been known to refer to himself as “woke.” He has a daughter. He went to an unconscious bias training class. He spoke at the women’s diversity cocktail party about how much diversity means to him personally. He’s in hot demand for golf foursomes at the summer outing.

But there’s one thing about Todd: He just never seems to promote someone like you. Or anyone who doesn’t look like him.

The Todds of this world — the “nice guys” and “nice gals” who give lip service to diversity but don’t drive it … even if they themselves don’t even know they don’t drive it — are out there.

Using the MONEY chapter you can learn more about some of the specific timings that so negatively impact women, namely the so-called motherhood, childcare and good daughter penalties. And while it’s often hard to advocate on your own behalf, you can do the right thing by fighting for parental leave, giving women pay rises, constructive feedback and promotions.

And related to that: arm yourself with the evidence in my BEHAVIOUR chapter too – get wise to the ways in which women are perceived differently, because it doesn’t matter how competent, well-educated or driven they are, there will never be any shortage of people denying them that pay rise or promotion.

Finally, it’s worth going back and reading some of the previous Feminist Fact Friday articles – then take your new-found knowledge and do something with it!

Patrick Collinson in the Guardian Women paid £260,000 less than men over their careers – report 28 October 2019