posted in Feminist Fact Friday on 22 February 2019 by Susi 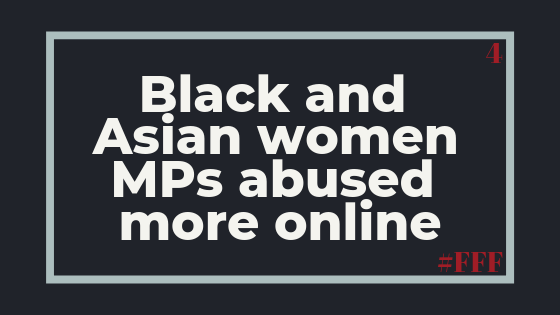 No struggle can ever succeed without women participating side by side with men.

A study by Amnesty International in the six months leading up to the 2017 election found some seriously disturbing (but unsurprising) results about the level of online abuse directed at women MPs. I’d encourage you to read coverage of the results here, here and here, but some key facts are:

A clear finding of our review is that intimidation is disproportionately likely to be directed towards women, those from ethnic and religious minorities, and LGBT candidates. A failure to tackle such abuse will perpetuate inequalities in Britain’s public life and restrict the diversity of those representing the public.

“Our research shows that there is a real danger that high levels of online abuse against women MPs will have a chilling effect on women taking part in public life – particularly women of colour.”

We heard that women were likely to cite intensive abuse on social media as a key factor in preventing them from seeking public offices – particularly if there may be threats towards members of their family.185 We are also concerned about the wider impact of intimidation directed towards the staff, supporters, and volunteers of candidates.

Aside from the obvious – that this behaviour just absolutely and utterly shouldn’t exist in a decent society – abuse is one of the many, many obstacles to women achieving equality in parliament. And even more so for women of colour.

The gendered and very much race-based nature of the abuse shows just how singled out particular groups are – and that they lack the power to defend themselves. An imbalance in representation means that very little recognition is given to what a widespread issue this is – just look at the problems that the tech companies are facing as a result of having very undiverse leadership teams who don’t realise how commonplace abuse is.

A Fawcett Society survey of women in public life found that only half of the women surveyed (50% of Facebook users and 43% of Twitter users) reported abusive content to the platform. This was largely because, from their experience, they did not think that the platforms would act on their reports.

Further, following allegations in the House of Commons, which were covered in detail in this article from the Financial Times, abusers continue to fill the nation, through to the very corridors of power at Westminster.

A large number of culprits and victims continue to work in parliament. Over four months, the FT has listened to the stories of more than 30 current and former MPs’ staff, interns and party volunteers from across the political spectrum. Some were still reeling from recent experiences, others shared stories they had kept quiet about for years.

Financial Times Abuse of power: the truth about sexual harassment in Westminster 14 June 2018

Unfortunately as the research shows, harassment isn’t limited to just politics. For example, a report from Everyday Sexism and the Trades Union Congress entitled ‘Still Just a Bit of Banter?’ revealed that of the 1,500 women interviewed, 52% of them had been victims of unwanted sexual behaviours at work, from groping to inappropriate jokes.

80% of the women affected by sexual harassment did not report it.

These findings are important because they highlight the inexcusable abuse that women and marginalised groups receive and which holds them back from having a voice in society. It’s also clear that many believe that the current system won’t step up to protect them.

Fawcett Society survey data found that when standing as a councillor, there is a gender difference between councillors identifying ‘fear of violence’ (13% of women; 8% of men), or ‘harassment or abuse from the electorate’ (46% of women; 35% of men) as barriers to engagement.134

If this abuse isn’t fought then women will continue to be kept out of politics – and so many other public spheres – against their will. Returning to weeks two and three of Feminist Fact Friday (women are only 32% of MPs, and only 4% of the House of Commons is made up of women of colour) we won’t see equality in numbers until we start to see a change in how women are treated.

What can you do about this?

Recognise that this is a problem and stop yourself from invalidating the experiences of those affected by abuse and harassment. Follow the Everyday Sexism Project (a collection of more than 80,000 women’s daily experiences of gender inequality) for just a day or two and you’ll soon see how commonplace harassment is and how badly it affects women.

Read the Fawcett Society’s Strategies for Success report to understand just how horrible so many of these experiences are for women.

Next time you voice a particularly strong opinion think about the language you’re using. Is it disproportionate? Would you use the same terms and criticisms for a man as a woman? Are you attacking the recipient personally, or critiquing their behaviour?

Look out for harassment in the public sphere – if you open your eyes to it you’ll soon notice this being a common tactic, even amongst everyday coverage of politics in the media. Women and men are not discussed in equal terms. *

Work towards being an ally. Can you find small ways to start calling people out on their behaviour?

N.B. This is a shorter post than the previous three weeks’ worth of posts as I’m working on a long-form piece to be published shortly.

Financial Times Abuse of power: the truth about sexual harassment in Westminster 14 June 2018