posted in Feminist Fact Friday on 27 February 2019 by Susi 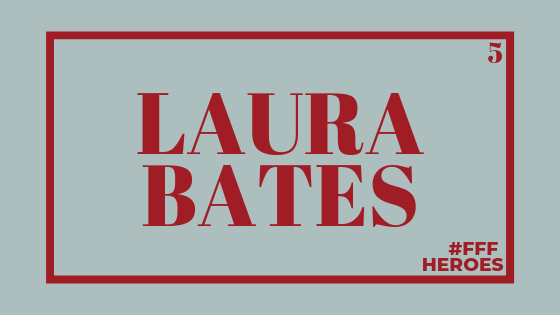 In the first three years of Everyday Sexism the project received 100,000 entries in 13+ languages.

I remember having a debate with my friend in halls during our first year at uni. She was taking a module on feminism and I disagreed with most of what she talked about, believing that we were already equal and that the debate was over. That was in 2007. By the time Laura Bates launched the Everyday Sexism Project in 2012 I was more than ready to have my eyes opened and it’s thanks to her that I really started to understand the scale of the problem.

One of the most pervasive issues in feminism and the fight for equality is the incessant need to make the case and prove that what we’re protesting against is even real. Arguments tend to begin not from ‘what can we do to solve this problem?’ but rather ‘does this problem actually exist?’

Stepping down as party leader from the WEP, Sophie Walker said exactly that in an interview with the Guardian: ‘before she can discuss a problem, she must first prove it exists.’

Whether equal pay, violence against women, sexual harassment … I’ve had to grit my teeth through tedious talk shows where they ask, ‘But isn’t it just flirting?’ It’s relentless. It happened on the Today programme at the height of #MeToo, where I had to debate whether some women like it!

Everyday Sexism began with Laura Bates’s own experience of sexual assault and she had very modest expectations when she first launched the site.

I had no idea when I started it that it would be doing anything beyond perhaps 30-40 people might see it. So no, I didn’t set out to change the world. I didn’t feel actually that I could tackle the problem, but every time I tried to talk about it, people told me insistently that it didn’t exist. And I thought ‘maybe I can’t fix sexism but what if I could get people to see it?’

The reason that Laura Bates is a hero of mine is that by launching Everyday Sexism in 2012 she did two things: she proved overwhelmingly that sexism still exists everywhere and showed the (mostly) women reporting problems that they weren’t alone. Laura Bates is the woman of my generation – one in a long line of women who have called it like it is – to hold up a mirror to society and show just how abhorrent and prevalent sexist behaviour is.

The Everyday Sexism Twitter account (almost seven years on from launch) now has 285k followers. The retweets and posts run the whole gamut of sexism from ‘can I speak to your boss?’ enquiries (only ever directed at women) and ways in which women’s presence is constantly questioned and belittled, through to harassment, sexual assault and rape.

How can we talk about the fact that fewer than a third of our MPs are women if we’re not even allowed to discuss the fact that when our Prime Minister and the First Minister have a massive meeting about Brexit the front page of our single biggest selling daily newspaper says ‘never mind Brexit, who won Legsit?’ with a close-up picture of their legs? Of course those things are related.

Why is Laura Bates important?

If you look at the 573 listed statues around the UK only 15% of them are of women, but only two of them are of a named black woman. If you look at the enormous online abuse experienced by huge numbers of female MPs, you also learn that in the run-up to the last election almost half of it alone was directed at Diane Abbott. So these are issues that are specifically affecting different groups and particularly intensely affecting people who live at the intersections of those groups.

In my introduction to the HEROES theme I wrote about why I’ve chosen this theme for March. I believe it’s vitally important for us to have role models and people in our lives we want to emulate. Though there’s no shortage of male role models and heroes, women’s successes haven’t been celebrated to the same extent to date. It’s up to us to rediscover heroes from history, to recognise the contributions of women right now, and to acknowledge the vital work that allies do for us too.

Launching Feminist Fact Friday I spoke about Laura Bates serving as an inspiration to me, leading me to recognise that though we shouldn’t need to make the case again and again that these issues still exist, if we do need to keep on proving ourselves then we’re best off having the facts to hand.

For me, Laura Bates represents what a difference it can make to step up and assume responsibility even as an everyday person. You might not be the one causing the problem, but by making your voice heard you can be a part of solving it. Bates proves that all of us can make a contribution, no matter how small we think that might be.

However, for all that I want to highlight the message that each of us can help in our own way, just by getting started, I don’t want to lose sight of the phenomenal impact and success Bates has seen through creating this movement. Thanks to her work the Everyday Sexism Project has changed lives.

[Everyday Sexism Project] created a space where women’s stories (where people’s stories – we didn’t just hear from women) but in particular where women and girls’ stories could be heard, often for the first time, and believed without rebuttal, without dismissal, without disbelief.

And we know the cathartic effect of simply being given a space to tell your story has a huge impact in itself because we’ve heard from so many people who’ve said that after seeing their story alongside those of so many others, after feeling like they weren’t alone, after realising for the first time that it wasn’t their fault they felt able to go on and report something, to report a rape to the police, to report discrimination in the workplace.

There are plenty of things you can do in your own way. Head back through the previous four weeks of Feminist Fact Friday to look at other suggestions and here are some ways to get started: