posted in Feminist Fact Friday on 7 March 2019 by Susi 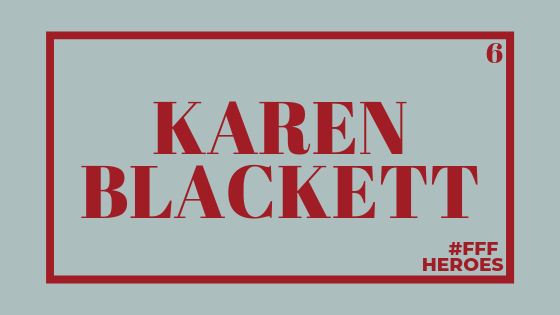 I am a black female. So, when I first started in the industry, the industry was led by people who essentially were white, middle-class men. Which is very different to me. So my difference made me stand out but also my difference gave me a unique view point. Because creativity comes from lots of different thinking.

So for me being one of a minority in the industry, it was a challenge, it made me resilient. But I think the end result: my talent is what has helped me. It is my talent that has made me Country Manager of WPP. Not my gender or my race.

I’ve been lucky enough to see Karen Blackett OBE speak at a number of media industry events, including most recently at 2018’s Media Business Course. She’s the kind of person who has a presence the moment she walks in the room – and that has nothing to do with ego, but rather a self-assuredness that I think we all wish we had.

If you’ve got the stamina and you’re ready to be impressed then I’d suggest starting off with her profile on the MediaCom website. Grab yourself a cup of tea before you do because you’ll probably have to read that long list of achievements in stages. And remember that she’s a single mother of an eight-year-old boy and that she became CEO just 10 months after he was born. Phew.

I love to find the whispers in the noise to deliver genuine consumer insight on clients business that delivers diverse and dynamic business growth. My role is to connect people from different walks of life to make magic happen. A good marketer always listens more and talks less.

Here are a few highlights from her MediaCom profile:

One of 35 Most Powerful Women Under 35 | Promoted to UK CEO in 2011, running over £1.2bn of media billings and over 1,100 people | MediaCom were voted Agency of The Year by industry magazine Campaign, for an unprecedented two years in a row, in both 2013 and 2014 | In 2012, Karen launched an Apprenticeship Scheme for 18-24 year olds at MediaCom | Profiled in Media Guardian, The Evening Standard, The Independent on Sunday, The Sunday Times Business, Company Magazine, The Independent | One of the Evening Standard’s Progress 1000 | One of Debrett’s 500 2016 | 2013 Women In Marketing Outstanding Contribution to Marketing Award | 2014 OBE for services to Media & Communications | 5 times in the Power List of Britain’s 100 Most Influential Black People | Non-Exec for Creative England | 2016 President of NABS | Karen is a single mum of a beautiful 6 year old boy called Isaac | Trustee for the charity Adopt A Better Way | Exec member of WACL | Advisory Board member of Shine Media

The broader media industry is a theme I’m saving for later in the year, but here are some important facts to show that Karen Blackett’s achievements are even more significant than they first appear (and in case you’re wondering, MediaCom is the UK’s biggest media agency in billings, having scored £1.3 billion in 2017). That’s because she’s scaled enormous heights in an industry and society where women and especially black women don’t have access to equal opportunities.

Why is Karen Blackett OBE important?

Talent is everywhere but opportunity is not.

Reeling off the many items from the list of Blackett’s achievements, including the fact that ‘during her five years as MediaCom’s CEO (she became chairwoman in 2016), the firm won more than £790m of business and was twice voted agency of the year’ it’s clear that to describe her as an excellent business woman would be an understatement. She delivers the kind of results that any of us would hope to be capable of.

I’ve chosen Blackett as the second HERO in my Feminist Fact Friday project because she embodies the kind of success that only comes with equal measures of talent and hard work and at the same time she has managed all of that in the face of systemic power imbalances in our society.

It’s 2019, over 100 years since some women first got the vote and yet, as Creative Equals are so cleverly highlighting for International Women’s Day, there are more men named Dave heading up FTSE 100 companies than there are women. And there are ‘more chief executives called Steve than there are from an ethnic minority in the FTSE 100’.

So, for Karen Blackett OBE to have achieved what she has, and to have achieved it in the face of all of the barriers society puts in the way of women, and particularly black women is something I think every one of us should be impressed with.

Further, her tireless efforts to push the envelope in diversity and inclusion and paying it forward, as well as just making media and society a better place for all of us model the best kind of behaviour we can hope for from senior leaders.

I know the difference it made when I became the CEO of MediaCom in terms of the representation of ethnic minorities at the company: it went from 11 percent to 20 percent in five years. I think that’s in no small part because there was somebody at the top of the organisation who comes from a minority background. Being in my position with the intersectionality of my ethnicity, being a woman, and being a single mum, it allows people to think it’s possible, that they won’t be discriminated against.

Karen Blackett OBE, ‘We Are Avengers Assemble’ : Karen Blackett on bringing Diversity and Inclusion to life at WPP 29 October 2018

Blackett is proof of the power of (active) role modelling. Having almost doubled the representation of ethnic minorities at MediaCom during her time as CEO she proves just how quickly these changes can be made when the will is there. * ^

To me, Blackett represents pragmatic business sense and strong will, mixed with raw talent, hard work and a huge dose of kindness and humility.

That’s a lot to look up to.

Karen is widely seen as the most important agency leader in the British ad industry.

1.Become bloody successful and inspire women and minority groups to follow in your footsteps [this might not be the quickest item to achieve on this list but that shouldn’t stop you].

2.Find your heroes. My first two HEROES pieces have focused on women in the public eye but that’s no reason to hold off on celebrating women (and allies) close to you. Whether that’s a tireless colleague, a fellow volunteer or a friend, let them know what you admire about them and encourage them to keep up the hard work. You never know how much they might appreciate the kind words.

3.Go back through the rest of Feminist Fact Friday and memorise a few of these numbers for yourself – there is power in the sheer volume of inequality that these facts prove and it helps reassure you that, no, you’re not crazy, inequality really is as bad and widespread as you suspect.

4.Related to that point, learn something new. Did you know before reading this piece that women chief executives are outnumbered by men named Dave? ** That’s six female CEOs in the FTSE 100. Women make up 51% of the population.

Find the facts, learn them and then start changing the reality behind them. As Seth Godin likes to put it: ‘make a ruckus’.