posted in Feminist Fact Friday on 15 March 2019 by Susi 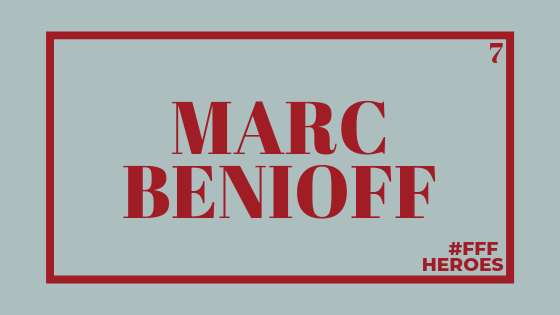 Marc Benioff is an American billionaire with a net worth of $6.4 billion. He’s the founder, chairman and co-CEO of Salesforce and he paid out $6 million to correct the gender pay gap.

Welcome back to Feminist Fact Friday where I’m mid-way through March’s theme of HEROES. For an explanation on this series, please start with the Intro, or go back to the start of this month’s theme for more on why I’ve chosen HEROES as this month’s topic.

There are plenty of well-known and forgotten women who belong in my list of feminist heroes. But this theme isn’t closed to men and for my third hero (see previous posts for Laura Bates and Karen Blackett) I wanted to open the series up to someone who has truly put his money where his mouth is when it comes to sexism.

As I’ve covered previously, the WEF currently estimates that at the current rate, it will take us 202 years to close the economic gender gap globally. That’s on top of the millennia it’s already taken us to get to our current position. Just as a reminder: some women were only franchised for the first time in the UK in 1919.

At least that’s the received wisdom.

But what about if you don’t assume that it has to take a long time nor that you have to accept very slow progress? What about if you use your power and your privilege to enact change at an extremely fast pace?

Why I’ve chosen Marc Benioff as a HERO

I wrote about Marc Benioff at the start of the year in a post on investment and the importance of money management for women (Investing in 2019).

CEOs, with one button on one computer, can pay every man and every woman equally. We have the data. We know what everyone makes. There’s no excuse.

As Benioff revealed in a segment on 60 Minutes, when Cindy Robbins, his chief of personnel approached him concerned that Salesforce might have a gender pay gap, he responded with denials “It’s impossible because we have a great culture here. We’re—we’re a ‘best place to work.’ And we don’t do that kinda thing. We don’t play shenanigans paying people—paying people unequally. It’s unheard of. It’s crazy.”

How many people think they’re better than that? That they’re not sexist or racist? We all hate those labels and try to think of ourselves as ‘good’ people but there aren’t enough people who will go deeper, look at the evidence and open themselves up to being wrong – and then do something about it.

Benioff sanctioned the a data audit, but with Robbins he agreed that if he were wrong then he would make sure to correct the imbalance. And sure enough, there was a difference in pay “everywhere. It was through the whole company, every department, every division, every geography.” To address the issue Benioff immediately raised women’s pay to the tune of a $3 million cost to the company.

The report also quotes the Peterson Institute for International Economics who conducted a survey of 21,980 publicly traded companies in 91 countries and determined that “the presence of more female leaders in top positions of corporate management correlates with increased profitability of these companies.” *

So, whether Benioff’s move was just around ‘doing the right thing’ or whether he’s smart enough to recognise the benefits of a diverse business, either way he doesn’t accept that change needs to come at a snail’s pace. I’d make a quip about how as a billionaire entrepreneur he’s probably realised his actions are taking advantage of both results – but when you look at the sexism endemic in Silicon Valley you just gotta wonder…

So, can you rethink your own position or your own business on terms like Benioff’s? What situation are you accepting right now that you could actually do something about if you looked at it differently?

On the surface this move might have cost Benioff $3 million (plus another $3 million a year later when a second audit revealed the gap had once again grown through a series of acquisitions) but it gained him a hell of a lot in productivity and good will – imagine the benefits you’ll unlock for treating women equally.

And though this research has been around for a long time (I featured it heavily in my own 2017 report on the benefits of equality) I’d like to draw out a few of the numbers from McKinsey & Co’s detailed 2015 study too:

Imagine the success that true diversity and inclusion could open up for you.

What you can do