posted in Feminist Fact Friday on 31 January 2020 by Susi 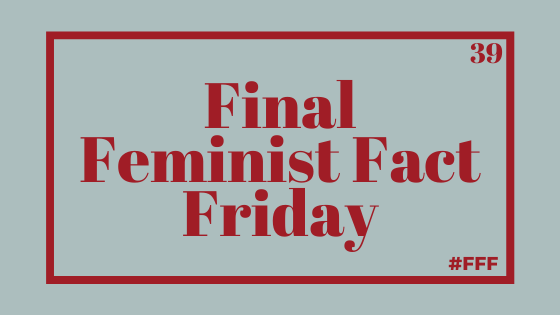 I’ve been thinking for weeks about the best way to end Feminist Fact Friday – a year’s worth of research, campaigning and self-educating. It came to me that the best way to end would be to go to the worst effects of completely normalised and endemic sexism, and then to reflect on what I’ve learned from 39 posts on inequality.

The chilling effects of perpetuating injustice

I first read about the issues around women and housing in Stylist, on the commute home in October last year. The headline read “It costs women 26% more than men to rent in London. Why?” but the more I dug, the worse the findings became.

Last year the Women’s Budget Group released their findings on women and housing. Some of their top findings:

When we talk of domestic abuse there are always people who ask ‘why didn’t she just leave?’ As I covered in the final post of my VIOLENCE month, “domestic violence accounts for 16% of violent crime, 1 in 4 women will fall victim to it in their lifetime and domestic violence has more repeat victims than any other crime.” In fact, the most dangerous time for a woman in an abusive relationship is when she makes the decision to leave, because that’s when her life is most at risk. The issue is far, far too common and one of the biggest contributing factors is women’s economic standing in society. How can a woman improve her situation or escape a damaging environment when she so often completely lacks the resources to live independently?

Further, though this is the most extreme end of the scale, what about women who want the freedom to live their own lives in the same way men can? How can our society continue to justify a situation where not a single region in England has affordable rents for women on median earnings?

I put the blame at the feet of all those people who revel in paying women less, or who avert their gaze when there’s money to be made. And as Alexandra Ocasio-Cortez so eloquently outlined just this week, ‘No-one ever makes a billionaire dollars. You take a billion dollars.’

In my penultimate Feminist Fact Friday post I wrote about how the UK has slipped down six places in the World Economic Forum’s gender equality rankings and that they estimated that it would take 257 years to achieve global economic equality – a 27% increase from the 2019 estimate of 202 years. Just as AOC pulls no punches on calling out those who benefit from inequality I’d like to state right here that if you’re not clearly and directly fighting against inequality with your actions and your policies then you are very much benefiting from entirely avoidable suffering. Women are trapped in dangerous situations because the rich would prefer to get richer and the powerful just don’t care.

Over the past 12 months I’ve covered politics, heroes, money, behaviour, men, sport, violence, health, the early years and education. And across every one of those spheres (and more) it’s clear that women continue to be discriminated against, and things are even worse for people with intersectional identities, where being a woman of colour, or LGBTQ+ just increases your chances of suffering in an unequal society.

At best it’s complacency and at worst it’s pure profiteering.

So, what has writing Feminist Fact Friday taught me over the last twelve months?

Equality will take as long as you give it

One of the most important things I’ve learned from writing Feminist Fact Friday is that timing is important in two ways: firstly, the more you rush your decision-making on tasks such as hiring, the more you will default to picking the easiest, quickest option; fighting your stereotypes and biases takes careful thought. Secondly, if you expect equality to take time, it will do. Years and years in fact. If you see increasing the diversity of your team as a box to tick long after ‘business priorities’ have been met then you’ll find that progress will never rise in importance. There is always something more urgent. And if you don’t treat it as a priority then you’re part of the additional 55 years’ wait that has just been foisted on us all.

Every single one of us has the power to make a difference, no matter how small. I’ve put actions with every post I wrote this year, ranging from armchair activism, through to donations and petitioning. Every time you tune out while someone speaks out, you tacitly approve of injustice. Add your voice and your actions to each one of these causes. If you’re not part of the fight one day you’ll be on the receiving end of the consequences, because there’s no limit to the suffering the powerful are willing to overlook on their way to greater riches and influence.

The facts validate what we already know

Most of us on the receiving end of injustice know instinctively that something’s wrong. Allies spot it too. But often we lack the vocabulary or the research or the scale to identify what’s truly wrong. Just men being promoted in your company? No publicly published parental leave policy? Suspect you’re underpaid? Keep working your butt off but see no reward? Get the feeling it’s only ever you being asked to make coffee?

Discrimination is often subtle, endemic and totally normalised, and we’re taught to think it’s just a one-off, only affecting us, but:

Learning all of the above is incredibly liberating because it makes you realise it’s not you, it’s them. One of my favourite posts from the above list is that women are 21% less likely to be promoted – and the reason it’s a highlight is that it’s based on data from 279 companies employing more than 13 million people.

With data like that the biases, the discrimination and the gaslighting come out more starkly than ever before.

Even with all of the facts to hand it’s still hard to fight our conditioning. How many of us have been told that women lack confidence, don’t speak up enough or talk about our achievements? Never mind the fact that our behaviour is misrepresented, often these characterisations are actually completely false. Just take the example above that women do ask for pay rises as often as men: as with so much of sexism this puts the onus on the individual woman, rather than recognising it’s the system that’s broken.

Me: ‘Coverage in the FT has shown that there is not a single sector in the UK where women are paid more than men.’

Them: ‘My last boss was a woman and she was paid loads.’

Me: ‘National crime statistics show that two women a week are murdered by a current or former partner.’

Them: ‘Don’t you think all of this men-hating has gone too far?’

Me: ‘Research across 279 companies and 13 million employees showed that for every 100 men promoted only 79 women are promoted and that number drops to just 60 for black women.’

Them: ‘There are loads of senior women at my company. And frankly, they’re not very nice. My last boss was a real b****.’

Me: ‘Research has shown that women are 29% more likely to be expected to do office house work. They’re penalised for not doing it. There is no reward for doing the work. Men are rarely asked and if they do it badly there is no penalty.’

Them: ‘I make coffee for my team all the time.’

I’d like to end by saying that many of the reactions I’ve had to my research and to Feminist Fact Friday have been positive and even though I’ve often encountered disbelief, disagreement or denial, the negative reaction I’ve encountered most often has been avoidance. The reason for that is clear to me: people would rather abdicate their responsibility for making the world a better place.

So, arm yourself with the knowledge and before you even need to use it for yourself, use it for someone else. Whoever you are, speak out in meetings, ask about your company’s parental leave policy, get mental health first aider training, question your company’s gender pay gap, donate money to charities, go on marches, advocate for better hiring policies, join support groups, sign petitions, and finally: read the Feminist Fact Friday back catalogue – it’s filled with examples that will help you call out the weak amongst us.

Lucy Mangan in Stylist It costs women 26% more than men to rent in London. Why? 2 October 2019