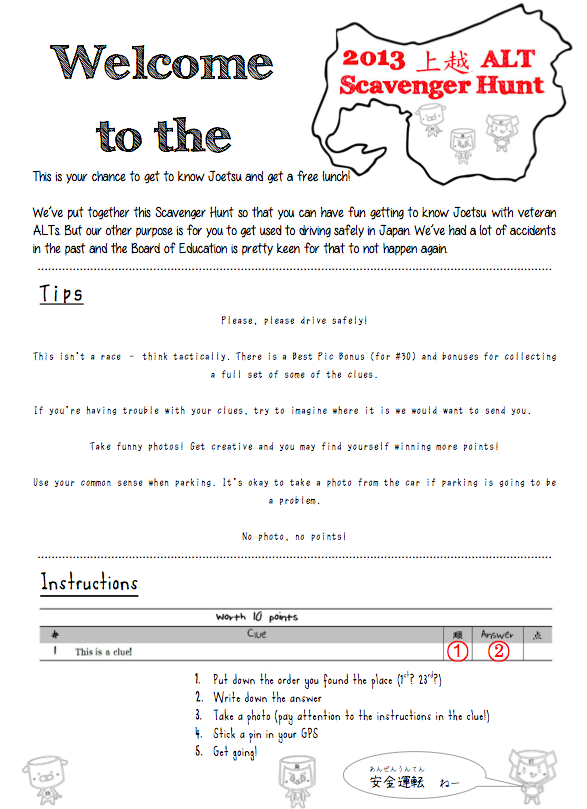 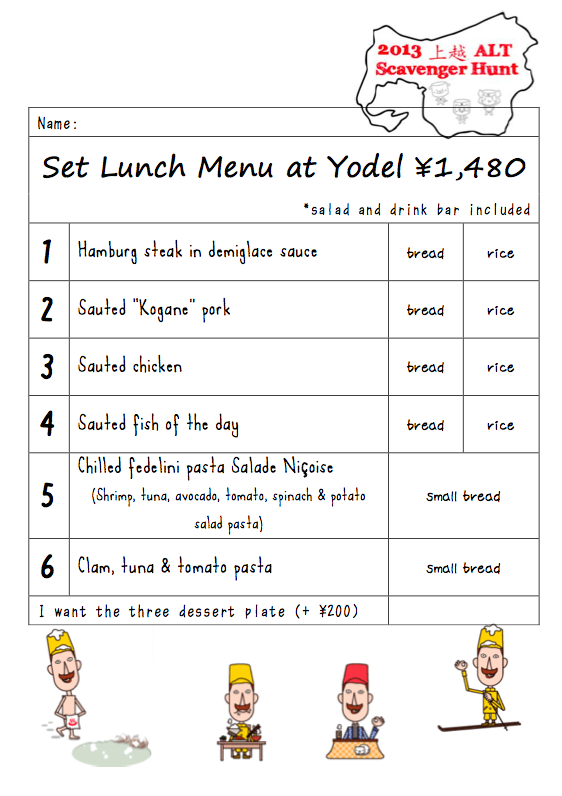 The 2013 Joetsu ALT Scavenger Hunt involved putting one new ALT with two or three veterans, for a sticking-to-the-speed-limit race around the city, cracking clues and taking fun photos at different locations.

How did this come about? While I was living in Japan a few of my friends were unfortunate enough to become involved in car accidents. This was a pretty worrying situation and it was stressful for them dealing with the repercussions in Japanese. The ‘official’ aim of the first Joetsu ALT Scavenger Hunt was to make new arrivals in Japan familiar with the area and learn to follow the rules of the road with the help of veteran ALTs.  Looking at the accident statistics from 2013 versus 2014, I would have to say it worked.

But I also made the original Scavenger Hunt in order to get creative, help our friends to bond and help them to get to know the city on their own terms. I masterminded this collaborative project but stuck to what I was best at: visuals and organisation. I wrote up instructions, trying to predict potential issues or dangerous points and also organised lunch in a local restaurant as the finish line.

As with everything I created I wanted to give it a strong brand image and in this case a local flavour. For the logo I used the city mascots (the kenkens) as well as a map of Joetsu. Uesugi Kenshin (the local hero) and Lerch also featured heavily. At that time I was still going through a major font addiction and so there’s a bit of a typographical overload, but it’s still fun to look back on.

For the clues themselves I turned to my friends who were far better at making the fiendish clues than I was. Working together to create different projects was easily one of the best parts of being an ALT in Joetsu. It was also fun for the veterans among us to relive our first few weeks in the area and how hard it had been to find our own way.