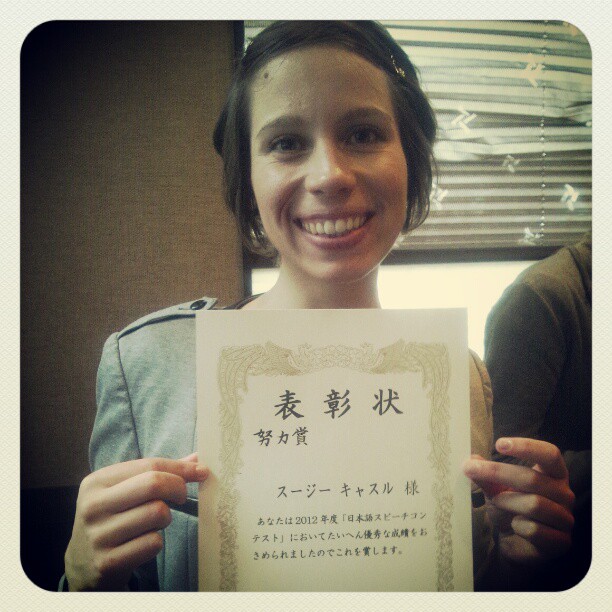 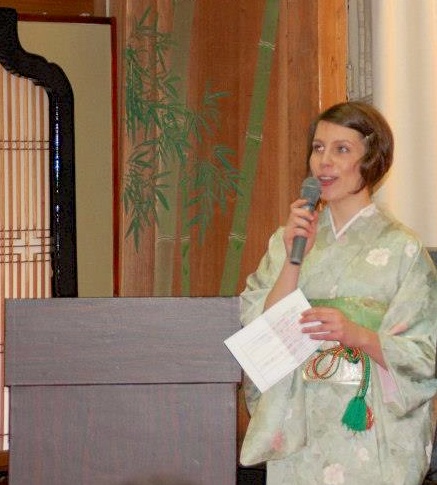 Always on the lookout for a chance to challenge myself further, I seized the opportunity to practice public-speaking a number of times while I was in Japan. The first time was in a local Japanese speech contest. I’m pictured here with my certificate for great effort (努力賞), so I quite obviously didn’t win, but it gave me a chance to face a crowd and try my nervous best.

Further opportunities came as I volunteered for AFS Joetsu. I MC’d at four different events over the 20 months I worked with them. In the picture you can see me MC’ing a Welcome Party in April 2013 at a traditional Japanese banquet hall. This party was for the German exchange student I would later mentor for a year and a Thai student who arrived at the same time.

One opportunity I found tougher than any other was giving a speech in Japanese while I was studying at the week-long Translation & Interpretation Course seminar in Shiga Prefecture in December 2013. One of the best parts of this course was to find myself studying with others who were all working enthusiastically together towards the same goal – improving our skills. The seminar culminated in a simulated conference where people took on different roles, some as interpreters, some as delegates. Surrounded by peers who had such a high level of Japanese I really pushed myself to do the best I could.

It can take some time to get accustomed to public speaking and having now given speeches in front of teachers, students, volunteer colleagues, complete strangers and friends, I’ve had the chance to speak in front of a whole host of different people. Giving speeches in Japanese, dressed in a thick kimono, or in front of people with very high standards has helped me to improve my presentation skills and build confidence in my abilities. Giving a speech in English will be a breeze in comparison!